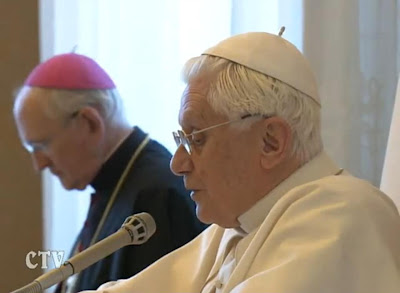 Today we feature a series of short quotations from Pope Benedict's address to the Bishops of England and Wales, which he delivered yesterday at the Vatican. The images are screenshots taken from Vatican television. Many news websites have always picked up on the first official confirmation of the Holy Father's forthcoming visit to Britain, which was mentioned near the beginning of the Audience. Referring to the faith of people in our land, he said, "On the occasion of my forthcoming Apostolic Visit to Great Britain, I shall be able to witness that faith for myself and, as Successor of Peter, to strengthen and confirm it. During the months of preparation that lie ahead, be sure to encourage the Catholics of England and Wales in their devotion, and assure them that the Pope constantly remembers them in his prayers and holds them in his heart." 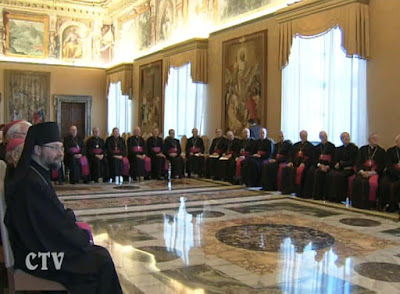 He then turned to a matter which has clearly been discussed by the Bishops during their visit: that of religious freedom. The Holy Father said, "Your country is well known for its firm commitment to equality of opportunity for all members of society. Yet as you have rightly pointed out, the effect of some of the legislation designed to achieve this goal has been to impose unjust limitations on the freedom of religious communities to act in accordance with their beliefs." There is a clear concern that some recent legislation has unfairly restricted religious liberty in our society. Developing his argument, Pope Benedict spoke of the Gospel's "right to be heard" in our country: "Fidelity to the Gospel in no way restricts the freedom of others – on the contrary, it serves their freedom by offering them the truth. Continue to insist upon your right to participate in national debate through respectful dialogue with other elements in society. In doing so, you are not only maintaining long-standing British traditions of freedom of expression and honest exchange of opinion, but you are actually giving voice to the convictions of many people who lack the means to express them: when so many of the population claim to be Christian, how could anyone dispute the Gospel’s right to be heard?" 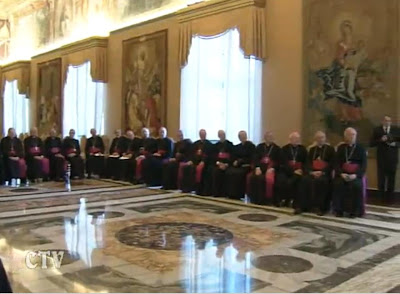 There was a powerful call to unity, which - the Holy Father noted - is even more important at a time when there are great challenges before us. It is important for all members of the Church to work together: "Make it your concern, then, to draw on the considerable gifts of the lay faithful in England and Wales and see that they are equipped to hand on the faith to new generations comprehensively, accurately, and with a keen awareness that in so doing they are playing their part in the Church’s mission. In a social milieu that encourages the expression of a variety of opinions on every question that arises, it is important to recognize dissent for what it is, and not to mistake it for a mature contribution to a balanced and wide-ranging debate. It is the truth revealed through Scripture and Tradition and articulated by the Church’s Magisterium that sets us free." 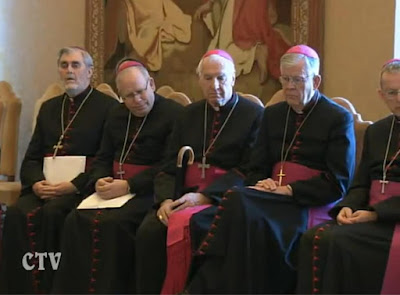 It seems highly likely that the Pope will beatify Cardinal John Henry Newman (1801-1890) when he visits Britian (probably in September), and he made reference to the Cardinal in his address, linking him with the current 'Year for Priests': "Much attention has rightly been given to Newman’s scholarship and to his extensive writings, but it is important to remember that he saw himself first and foremost as a priest. In this Annus Sacerdotalis, I urge you to hold up to your priests his example of dedication to prayer, pastoral sensitivity towards the needs of his flock, and passion for preaching the Gospel. You yourselves should set a similar example. Be close to your priests, and rekindle their sense of the enormous privilege and joy of standing among the people of God as alter Christus." 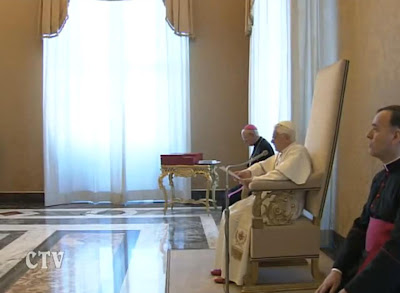 The Holy Father ended his address by entrusting our country to its patrons: "With these thoughts, I commend your apostolic ministry to the intercession of Saint David, Saint George and all the saints and martyrs of England and Wales. May Our Lady of Walsingham guide and protect you always. To all of you, and to the priests, religious and lay faithful of your country, I cordially impart my Apostolic Blessing as a pledge of peace and joy in the Lord Jesus Christ." These brief extracts give a sense of some of the issues the Pope - and no doubt our own bishops - wanted to highlight, and perhaps a flavour of some of the concerns that the Holy Father will speak about when he comes to our country. The full text is quite short and is well worth reading. You can find it here. It's also worth taking a look at Archbishop Nichol's greeting to the Pope, the text of which can be found on the Bishops' Conference website, here.
Posted by Lancaster Cathedral at 06:55