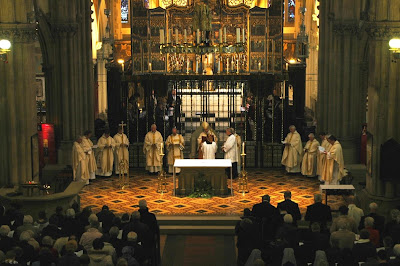 This morning the priests and people of the Diocese gathered with Bishop Patrick for the biggest annual event in the Cathedral: the Chrism Mass. Each year on Maundy Thursday morning, the priests renew their commitment to priestly service, and the holy oils are blessed for use around the Diocese in the coming year. 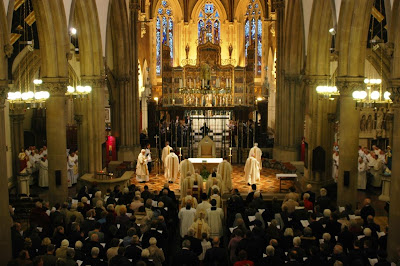 This is an occasion that reminds us of our unity - a theme strongly emphasised by the Bishop in his homily. There were representatives of parishes across the Diocese: from Carlisle, west Cumbria, Barrow-in-Furness, Kendal, Preston, Blackpool, Fleetwood, the Fylde and Lancaster. The list could go on further. 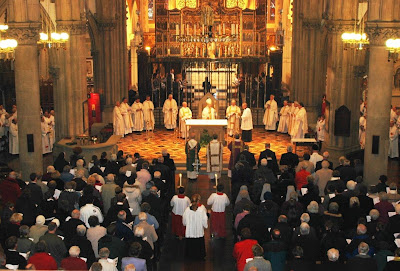 Three deacons (dressed in green, white and purple dalmatics) brought forward the three oils: the oil of catechumens, to be used on those who are to be baptised; the oil of Chrism, used at Baptism, Confirmation and Ordination; and the oil of the sick, used to anoint those who are ill or, in some cases, close to death. 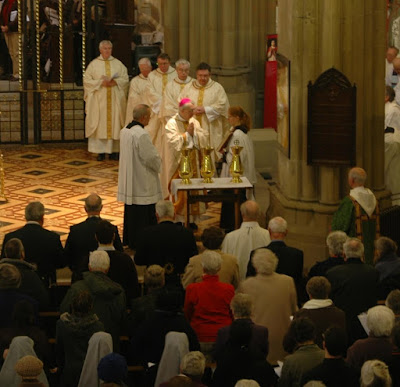 The oils are blessed during the Mass and then distributed for use around the Diocese. The remaining oil is kept at the Cathedral, and will be displayed throughout the year as a reminder of their importance in the Church's life.

The oil of Chrism will be used in 11 days time to anoint the head of the new bishop, Fr Michael Campbell, at his ordination. Today he concelebrated at the Mass; he can be seen just to the left of Bishop Patrick. It was Fr Michael's first public appearance at a diocesan event. He moved into the Diocese on Tuesday, and will be resident at St Mary's, Barrow-in-Furness, until he takes over fully in mid-2009.
Posted by Lancaster Cathedral at 22:52