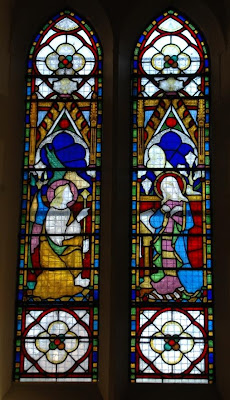 Today is the feast of the Annunciation, when the Angel Gabriel appeared to Mary and asked her to be the Mother of the Saviour. The scene is represented in one of the windows of the former convent chapel at the Cathedral (now referred to as "St Walburga's", and used mainly for catechesis). As you can see from this image, the window is quite badly faded, seemingly as a result of faulty glass-making techniques which were sometimes used in the early 1850s. 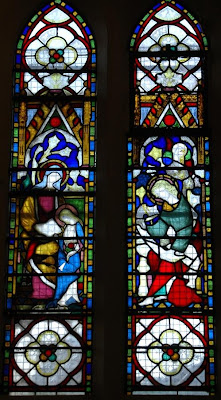 The other stained glass window on the same wall shows two independent scenes: on the left Our Lady as a child, being taught by her mother, St Anne; on the right, St John the Evangelist at work. It too has suffered over the years, with much of the detail lost. There are examples of this sort of deterioration in other churches; one notable example in the north of England is the glass in St Joseph's Chapel in the seminary at Ushaw, which dates from around the same time.

Posted by Lancaster Cathedral at 06:38