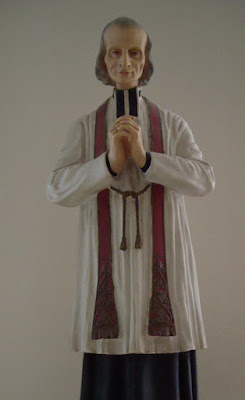 Today our two Bishops and the 'junior clergy' (priests who have been ordained less than 10 years) begin a five-day retreat at Ars, France. This little village was for 40 years the parish of St John Vianney, a priest of extraordinary holiness who drew great crowds, particularly to confession. By the end of his life he would sometimes spend up to 18 hours per day in the confessional. The little statue of him pictured here is found upstairs in Cathedral House. He died in 1859 (the same year that the Cathedral was opened) and canonised in 1925 (the same year that Thérèse of Lisieux was declared a saint). Made patron saint of Parish Priests in 1929, he remains an example and an inspiration to priests engaged in pastoral ministry. Our own Fr Andrew is among the priests travelling to Ars today; after their return, we hope to post a few pictures.
Posted by Lancaster Cathedral at 06:18