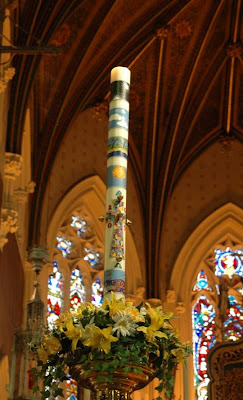 Towering over everything else on the Cathedral sanctuary, the Paschal Candle proclaims the resurrection of the Lord. This great symbol of the risen Christ is lit for all liturgy during Eastertide, having been first lit from the Easter fire on Holy Saturday night. 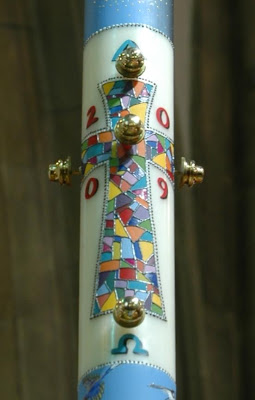 Certain elements always appear on the candle. The alpha and omega - the first and last letters of the Greek alphabet - appear above and below the cross, reminding us that Christ is "the beginning and the end". The date - 2009 - is seen around the candle. Five grains of incense in gold-coloured studs are inserted into the candle at the Easter Vigil. These are references to the wounds of Christ, just as His risen body retained the marks of His death (see John 20:27). 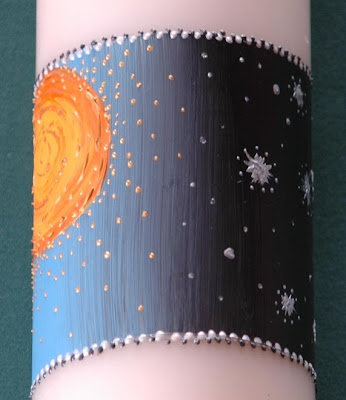 The rest of the decoration varies each year. This time around the candle is decorated with six bands representing the six days of creation. Here we see the creation of day and night on the fourth day; the sun and the moon and stars are created. Using the days of creation as a theme for the candle seems appropriate, as the resurrection is a new creation. Now God recreates the world, restoring humans to His image and likeness. The Gospel reading for Easter Sunday began by telling us that "it was very early in the morning on the first day of the week, and still dark" when the women went to the tomb. In the darkness, on the first day of the week, God again says "Let there be light." 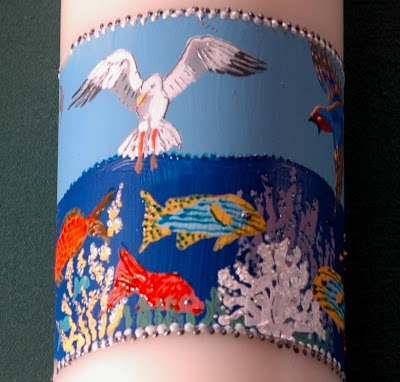 The creation of the birds of the air and the fish of the sea (day 5) is depicted here... 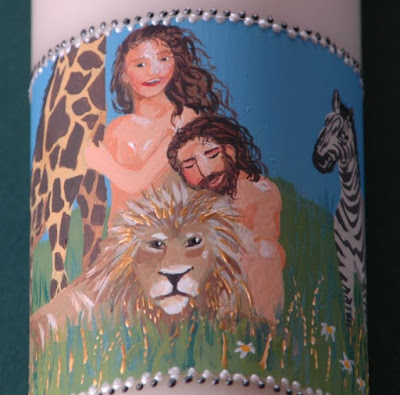 ... and here, of course, are the first humans - popularly known as 'Adam and Eve' - amongst the many animals that God created on the sixth day. The Exsultet, sung at the beginning of the Easter Vigil, famously speaks of the "happy fault", the "necessary sin of Adam which gained for us so great a redeemer."

Placed in its stand, the candle occupies a prominent place on the sanctuary until Pentecost Sunday (this year 31st May), after which it is moved to the baptistery. 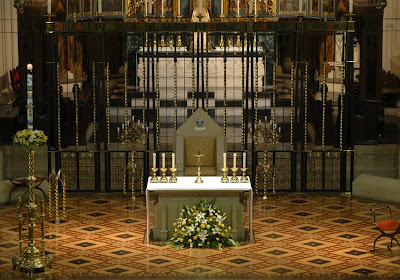 Posted by Lancaster Cathedral at 07:36