The Saints Rejoice in Heaven 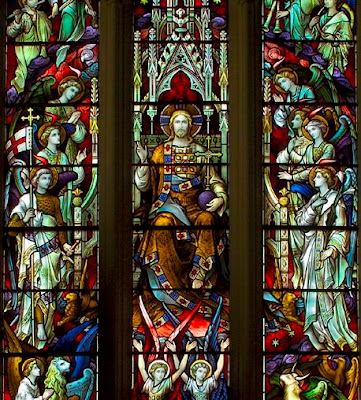 Today we celebrate the feast of All Saints, remembering all those - known and unknown - who have reached eternal salvation in heaven. To mark the feast today's post features images from the Cathedral's magnificent 'Te Deum' window. Made by Hardman of Birmingham in 1888, it dominates the west end of the church. The central figure is Christ, exalted and enthroned in heaven; around Him angels and saints sing His praise, forming a circle-like pattern (representing eternity) around His throne (see picture above). 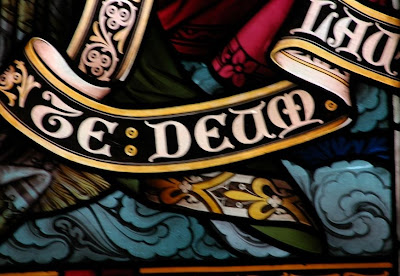 The window takes its name from the great hymn of praise, the 'Te Deum', attributed to Saint Ambrose and St Augustine of Hippo. This hymn is used on great feast days (and, as we saw earlier in the year, at episcopal ordinations), and speaks of those gathered around God's throne: "The glorious band of apostles, the noble company of prophets, the white-robed army who shed their blood for Christ all sing Your praise". Last year the Cathedral revived in this part of the world the tradition of singing this hymn at Vespers on New Year's Eve, in thanksgiving for the year as it draws to a close.

There are many identifiable figures represented in the window. Above, Old Testament figures include King David (in green; a crown shows his kingship and the harp demonstrates his link with the psalms) and Isaiah (holding the large saw, by which (according to some ancient texts) he was martyred. 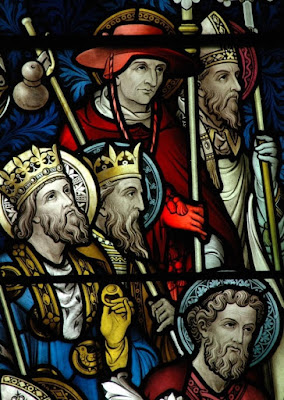 New Testament figures are joined by later saints: here Saint Joseph is seen (bottom right - a lily, representing his purity, can just be seen at the bottom centre of the picture); kings and bishops are also visible, among them the 16th century cardinal Charles Borromeo, whose feast day is kept on Tuesday this week. 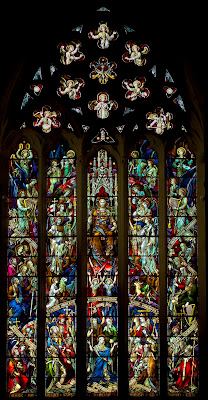 The window is an outstanding feature of the Cathedral and an inspiration to us as we, with the help of the saints' prayers, make our own journey towards heaven. Click on the image above to enlarge it - it's well worth a look.
Posted by Lancaster Cathedral at 08:11