Dusting off the past 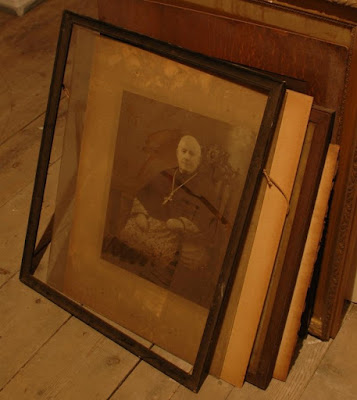 Over the weekend a little archaeology has been taking place in Cathedral House. There has been no digging (at least not in a literal sense) but there has been a fair amount of searching through old pictures and books to learn a little more about the history of the parish, ahead of next year's 150th anniversary. New discoveries will feed into two big projects - the exhibition at Lancaster City Museum (21st September-20th November 2009) and 'Billington's Blog', the historical blog featuring pictures and accounts of life at St Peter's over the years. 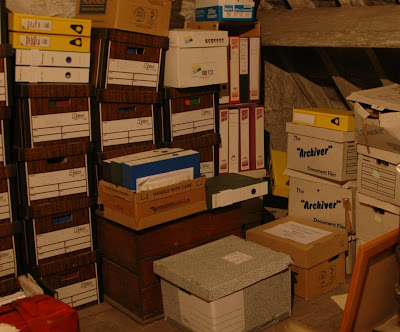 We could probably count on one hand the number of blog readers who could easily identify where this photo was taken. In an obscure part of Cathedral House lurk boxes of archived material. Most of it is of little or no use for next year, but there were a few old photographs which will come in handy. Most of them (as the top image of this post suggests) need a fair amount of dusting off before they will be of any use! Elsewhere, on an untidy if less dusty desk, some of the material is being put together ready for next year. The image here shows a notice book; these were used to record the weekly announcements in the days before parish newsletters, and now prove to be a valuable source of information about bygone years. Keep an eye on the blog for more about this work and details of where you can find Billington's Blog, to be revealed later this month.
Posted by Lancaster Cathedral at 08:56