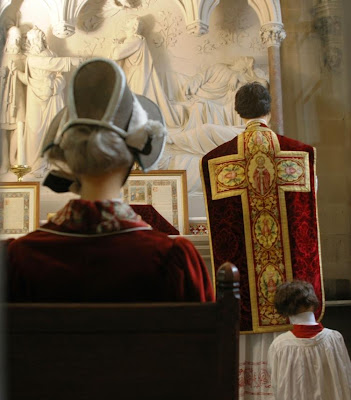 Do you notice anything strange about this picture? One or two parishioners and visitors to the Cathedral have done a 'double-take' when they encountered this scene. Here is a mock-up of Mass for the feast of Saints Peter and Paul in 1860. It has been set up as an addition to our 150th anniversary exhibition, which is currently running at Lancaster City Museum. 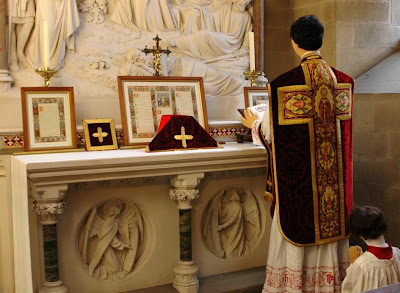 Before the reforms of the 1960s and 1970s, altars were generally fixed against the east wall of the church/chapel. The priest would face east when addressing God, and turn to face west (towards the congregation) when addressing the people. Here the priest is seen reading the Epistle at Mass. A server, who answered the responses to the prayers on behalf of the congregation, is kneeling behind the priest. 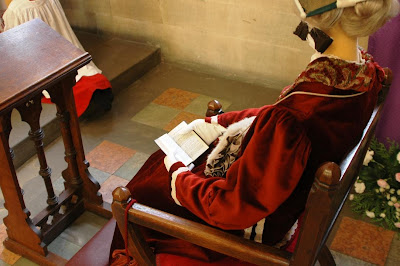 A lone woman is in the 'congregation' at the scene we have created. As the congregation did not have responses to make for most of the Mass, they would generally make their own private prayers and devotions during the liturgy. 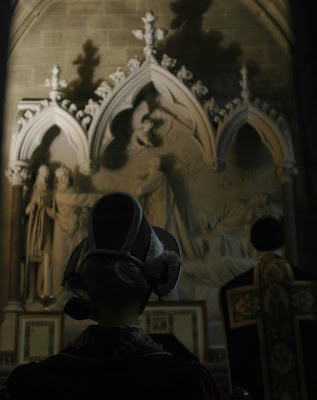 Here's a slightly darker - perhaps more 'atmospheric' image of the scene. It gives a good view of the reredos above the altar, which shows the agony in the garden. 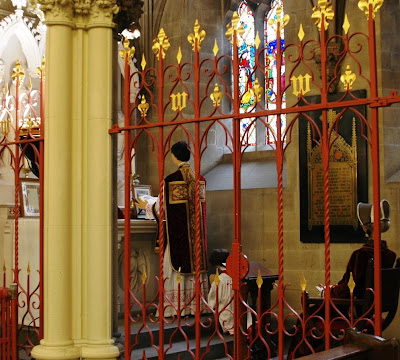 The mock-up is realistic in almost every way - obviously we can't light the candles, as they would soon burn to nothing, but otherwise things appear as they would have during Mass. The scene can be viewed in the Cathedral's Whiteside Chantry until 21st November (with the exception of the period when the relics of St Thérèse are with us). Meanwhile, the countdown to our 150th anniversary continues - there are just 15 days to go.
Posted by Lancaster Cathedral at 16:53