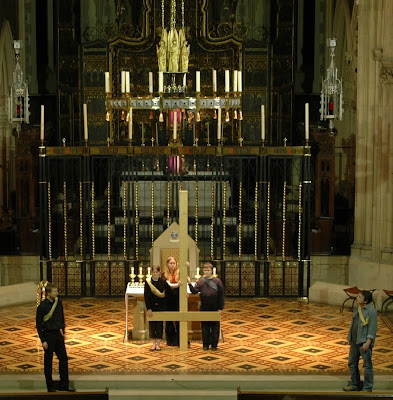 As mentioned earlier, at the weekend the first of three dramas marking our 150th anniversary took place. It was called 'Peter's Progress - the windows speak', and aimed to bring to life some stained glass windows which show the story of our patron. 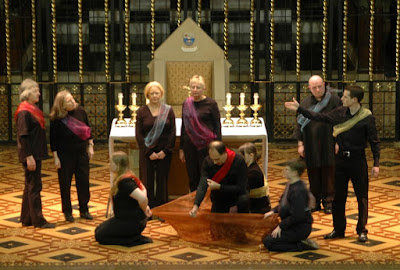 At the beginning the twelve scenes were represented in stillness, accompanied by appropriate music sung by a quartet. The singers blended from one piece to the next as the scene changed; the result was very effective. Above we see Peter (crouched, with the red sash) among his fishing nets. He is being called by the Lord (on the far right of the picture). 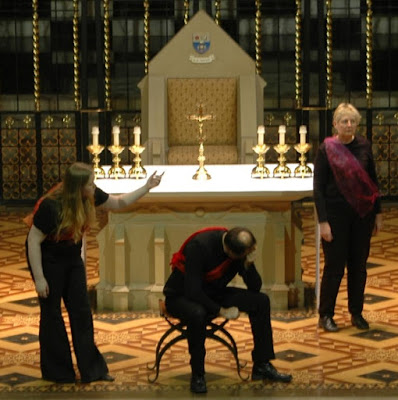 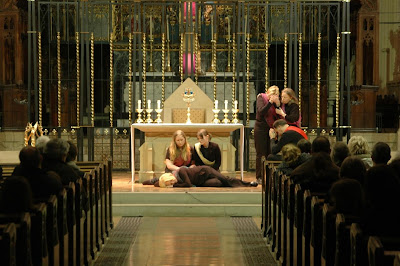 The story moved through Pentecost, when Peter's great speech brought many people to faith, and then on to show him continuing the work of the Lord. Here he prays that Tabitha may be restored to life. 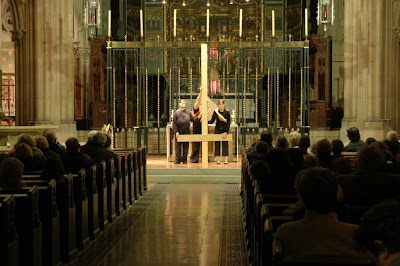 The final scene represented Peter being crucified, upside down. After many trials and failures, along with some moments of brilliance, Peter finally completed the task the Lord had set him in the first scene: "Follow me". 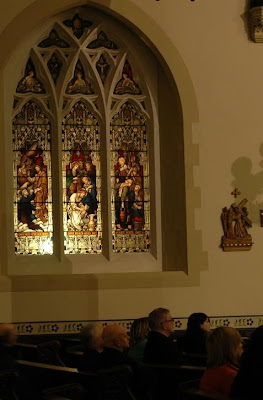 It was dark, of course, so the windows were lit from outside as the scenes were portrayed by the actors. 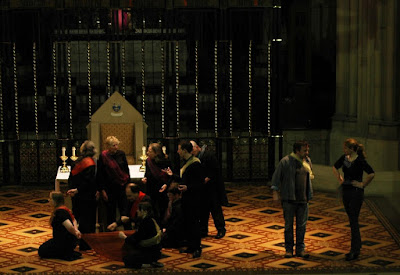 After the twelve scenes, the drama moved on to provide some interpretation set in a modern context. The idea was simple but very effective: it centred on an actor, a man of no faith, called to take part in a play about Peter's life. At first he is highly reluctant to get involved, but over time he grows more interested in the story of the saint, and begins to learn from it. Through his eyes the audience was invited to interpret the events depicted, so that they too could take something from the life of St Peter. 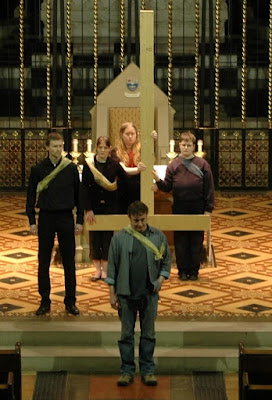 In the end the actor takes much away from what he has learned. It was not a fairy-tale ending in which he came to a deep faith; rather, his journey of discovery led him to appreciate the life of St Peter and to think about what faith in Christ means. From being firmly on the outside he is, at least, left wondering, and cannot help being inspired by the sacrifice Peter made for the Lord. 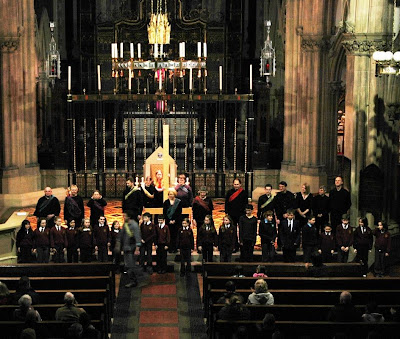 It was very impressive to see so many people involved in the production: some professional actors working alongside parishioners of all ages, including many children. Two more dramas based on St Peter are planned for later in the year: St Peter's Walk (at the Cathedral, daily 15th-21st June) will explore his influence on the early Church, and in St Peter: Keeper of the Keys (at the Grand Theatre, 18th October), he will meet some of the historic figures of the Cathedral at the gates of heaven. You can find much more about what's happening this year on our events page: click here to take a look.

Posted by Lancaster Cathedral at 07:45