Ad Limina: the Bishops at Mass in St Paul's 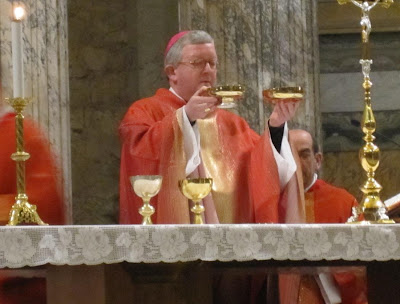 As you may know, we normally begin the month with a look at the forthcoming events, but our 'diary' post will be a little delayed to make space for other entries. It will appear later in the week, but meantime don't forget that tomorrow is the feast of the Presentation of the Lord (Candlemas), and there will be an extra Mass, beginning with a candlelit procession, at 7pm in the Cathedral. For now, though, we head back to Rome to catch up on the Bishops' Ad Limina visit, which is already past the half-way point. 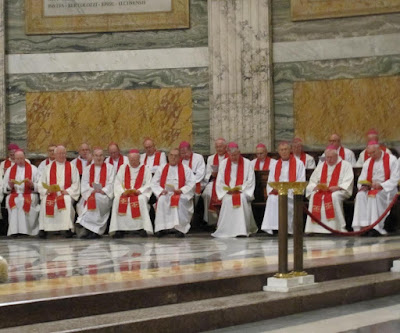 The pictures here show the Bishops at Mass in the Papal Basilica of St Paul Outside the Walls; the Mass took place last Wednesday. Our own Bishop can be seen second from the left on the front row. 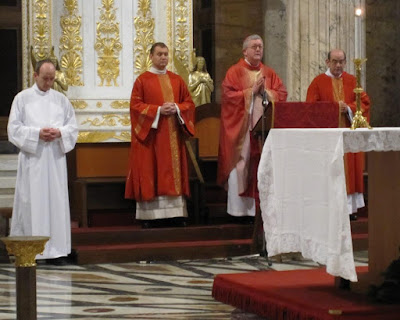 The principal celebrant at the Mass was Archbishop Bernard Longley, recently installed as Archbishop of Birmingham (see our post on the installation here). Red vestments are being worn; presumably a votive Mass of St Paul was celebrated, as the altar here is only a few yards from the Apostle's tomb. 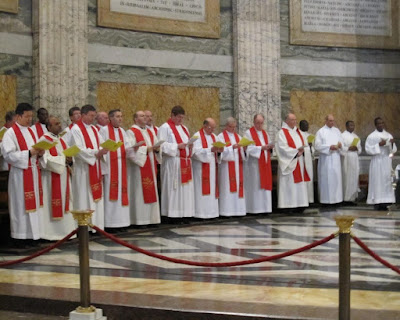 Here are the priests who concelebrated the Mass. Fourth from the left on the front row is Mgr Mark Davies, who will be ordained coadjutor Bishop of Shrewsbury on 22nd February. Mgr Davies was granted an audience with the Holy Father earlier in the week, along with the current Bishop of Shrewsbury, Rt Rev. Brian Noble, who hails from our own Cathedral parish. Also in the picture above (third from the right) is Darren Carden, a seminarian for our Diocese, who is currently studying at the Pontifical Beda College just across the road from the Basilica. Thanks to Darren for sending in these images. After the Mass the Bishops were treated to a meal at the Beda. We'll have more from Rome over the next few days, when the Pope addresses our Bishops as the meeting draws to a close. Meanwhile, if you'd like to see more on the Basilica, an earlier post shows images of the Cathedral parishioners' visit on our pilgrimage last October.
Posted by Lancaster Cathedral at 07:08