On this last day of 2009 we take a look back at the Cathedral's 150th anniversary year, which has surely been one of the busiest of its history. Great events have been held to celebrate the anniversary, most notably the Flower Festival, three dramas based on the life of St Peter, a highly successful exhibition at Lancaster City Museum, a pilgrimage to Rome and a festival of music inspired by Dr Dixon, 100 years after his appointment at St Peter's. The celebrations reached their climax with the anniversary day, 4th October 2009, when several bishops joined a large congregation at both Mass and Vespers. 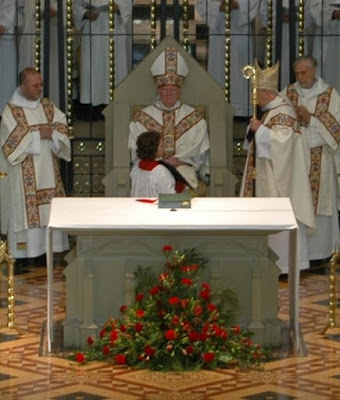 In diocesan terms, by far the most notable event of the year took place in the Cathedral on 1st May. Bishop Patrick retired after eight years overseeing the Diocese, and handed the crozier to Bishop Michael, who now takes us forward. The Cathedral blog has also covered the retirement of Cardinal Cormac Murphy-O'Connor and the appointment and installation of his successor, Archbishop Vincent Nichols, along with the installation of Archbishop Longley in Birmingham and the episcoal ordination of Bishop Seamus Cunningham in our neighbouring Diocese of Hexham and Newcastle. That same diocese experienced a great sadness earlier in the year when its former bishop, Hugh Lindsay, died at his residence at Boarbank, in our own Diocese of Lancaster. For the Cathedral there have been changes too, as Fr Lourdu left us to take up a post in Wisconsin at the beginning of July. A new provost, Canon Dunstan Cooper, was appointed, and the Chapter also welcomed two new members: Canon Luiz Ruscillo and Canon John Watson. 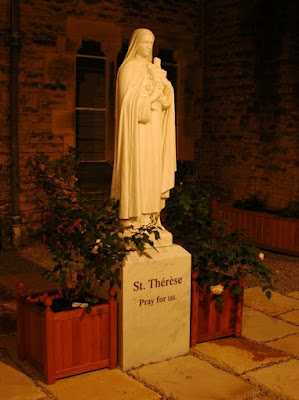 Probably the event of the year that will stay in people's memories - and certainly the one which attracted most interest on the blog - was the visit of the relics of St Thérèse at the end of September. It was an extraordinary experience to welcome so many people to the Cathedral and to be part of such an important national event. The visit has left a permanent physical mark at the Cathedral, with the new cloister garden dedicated to St Thérèse which has been created during the course of the year. Other material works in 2009 included the completion of the organ restoration work after a two-year rebuild of our fine instrument. 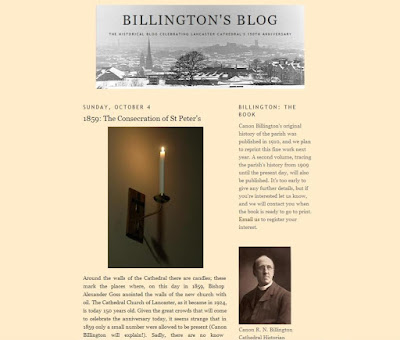 Another permanent legacy of 2009 will be Billington's blog, which although now at its end will remain online as a permanent and fairly comprehensive survey of the Cathedral's history (click here to take a look). Much has been uncovered about the history of our parish and Cathedral during the course of the last twelve months, and some of the information and discovered images will be useful in the preparation of the reprinted and updated parish history due to be published in 2010. Across three blogs 598 posts have been published, all designed to make the life of the Cathedral accessible to a wider audience and to keep people informed. It's extraordinary who finds these sites, too: in 2009, for example, we have been linked to by an American website that deals with heraldry, who made an analysis of the Bishop's new coat of arms, and by a priest in Alaska who uses a plane to get between his mission statements. His website picked up on a post we ran about St Thérèse as the patron of aviators! 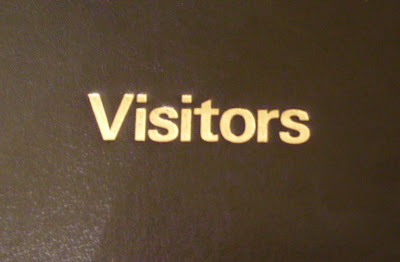 There have, of course, been events which we have been unable to cover: think of, for example, the Diocesan Education Mass in September or the Mass for Marriage and Family Life held in May. A signifant number of concerts and other events have all escaped the blog's cameras, but nonetheless form an important part of the life of the Cathedral, the parish and the Diocese. It is impossible to cover everything, such is the busy and varied life of a cathedral church. Alongside the events, it's been a record year for visitor numbers, and among the several hundred who have signed the visitor's book in 2009 are people from Australia, Norway, Mexico, USA, Poland, Oman, India, Slovakia, Ireland, Germany, Spain, Malta, Italy, Israel, Finland, West Indies, Canada, Belgium, Greece, Croatia, Lithuania, the Netherlands and Malaysia, as well as many more UK and local visitors. At every level it's been quite a year, and hopefully one upon which many people will look back with fond memories. Now we must turn our attention to the future, and the challenges of 2010, but before we do we will see out the current year with sung Vespers and Benediction this evening at 6pm. The Te Deum will also be sung in thanksgiving for the blessings of 2009. All are welcome.
Posted by Lancaster Cathedral at 07:20