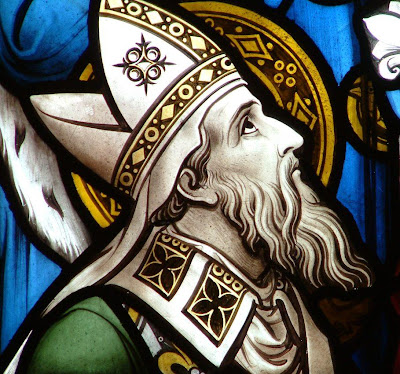 Today is the feast of St Ambrose, the fourth century Bishop of Milan who baptised St Augustine of Hippo after his conversion. Ambrose was seemingly named Bishop by popular acclaim, and went on to govern the Diocese of Milan with great care. He is one of thirty-three sainst to be given the title 'Doctor of the Church' on account of his theological writings and his contribution to the Church's thought. This image of the saint is taken from the Cathedral's 'Te Deum' window; tradition holds that the Te Deum, a great hymn of praise, was composed by Ambrose and Augustine.

Posted by Lancaster Cathedral at 06:54