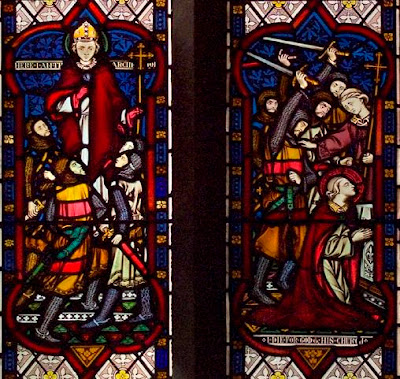 In the Cathedral's Coulston Chantry is a window showing the martyrdom of St Thomas Becket. He was appointed Archbishop of Canterbury in 1162, and although until that point he had enjoyed excellent relations with the King, the relationship soon turned sour. The Archbishop defended the rights of the Church, and was put on trial by King Henry II; he then fled to France, appealed to the Pope for help and negotiated with the King from abroad. In 1170 he unexpectedly made peace with the King and returned to Canterbury, but four knights overheard the King speak ill of him and set out to Canterbury, thinking that they were acting in accordance with Henry's wishes. They murdered the Archbishop in his Cathedral on the afternoon of 29th December 1170. Thomas was canonised in February 1173, and Canterbury Cathedral quickly became his shrine, attracting a great many pilgrims from all over Europe. Among the many works inspired by the events depicted here is T. S. Eliot's 'Murder in the Cathedral', a performance of which was mounted by Cathedral parishioners here in Lancaster in November 2005.

Posted by Lancaster Cathedral at 06:47