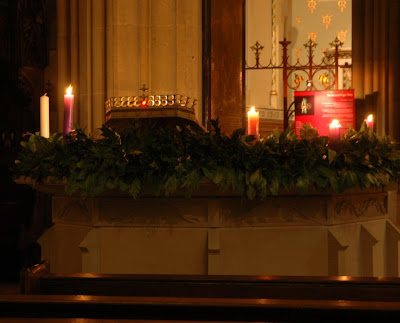 Four lit candles signify that we are now in the last days of Advent. These final days of the season are especially dedicated for us to make spiritual preparations for the feast of Christmas. It has been encouraging that so many people have taken the opportunity to go to confession in the last few days - as well as the reconciliation service last week and the regular times, there were an additional three hours of confessions heard in the Cathedral over the weekend.

An earlier post mentioned that Vespers is being sung daily, with the O antiphons, in the run-up to Christmas. Here too, there have been good signs. Yesterday, for example, there were around 40 people at Vespers, and even during the week the number of people attending has been encouraging. If you're free and in the area tonight or tomorrow evening, there will be Exposition at 5pm and Vespers and Benediction starting at 5:30pm. 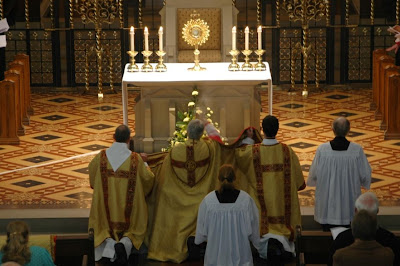 The Second Vatican Council expressed a desire that Vespers be celebrated in public, so that people could participate: "Pastors of souls should see to it that the principal hours, especially Vespers, are celebrated in common in church on Sundays and on the more solemn feasts. The laity, too, are encouraged to recite the divine office, either with the priests, or among themselves, or even individually" (Sacrosanctum Concilium, n. 100). If this is the Church's wish for every parish, it must be especially true of cathedrals. Vespers is now familiar to many Cathedral parishioners and visitors, being celebrated on great feasts such as the Dedication of the Cathedral (above), 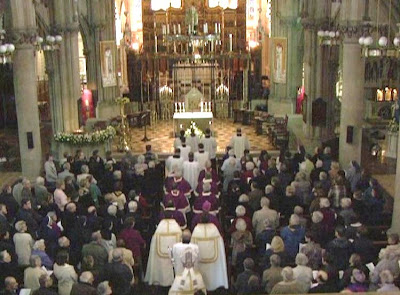 on the day of Bishop Campbell's ordination (when 300 attended), 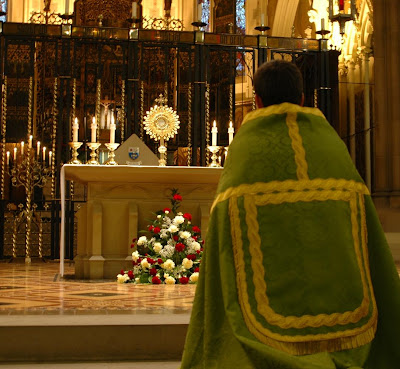 on some major feasts and on every Sunday of the year. When this practice was first introduced a few years ago the congregation was often very small, sometimes numbered in single figures. Now each Sunday and even on weekdays there is a good attendance. Numbers, of course, can never be the only (or even the most important) benchmark, but it is heartening that people are responding to the Vatican Council's vision that this should be the prayer of the whole Church, and not just of priests and religious. If you'd like to come to Vespers, it is celebrated every Sunday at 4:40pm; alternatively, come along on Christmas Eve (at 4pm, with the Office of Readings), New Year's Eve (6pm) or New Year's Day (also at 6pm).
Posted by Lancaster Cathedral at 12:18