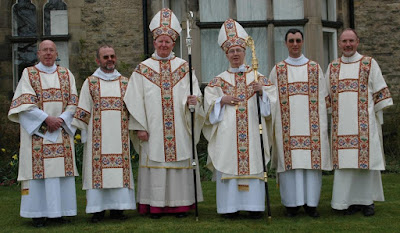 After the ordination, various groups gathered for photos on the lawn outside Cathedral House. The above photo, showing the two bishops surrounded by the four deacons, illustrates well the magnificent new vestments that were used. The were made in Poland at great speed - the order was only placed after Bishop Michael's appointment was announced in mid February - and purchased from Luzar Vestments. Richard Luzar's website can be found at http://www.luzarvestments.co.uk/.

There were quite a few layers for the bishops to wear! Bishop Michael is pictures here. Over his purple cassock he is wearing an alb (the white garment), as is usual for Mass. Over the alb he wore a stole - a symbol of his authority. The stole is worn in the same manner by bishops and priests. Over this he wore a dalmatic (the squared-off edges and gold trim can be seen in the picture). The dalmatic is worn by deacons (as in the picture above), and so represents service, as deacons are servants within the Church. Finally, a chasuble is worn over all of these. Bishops and priests wear a chasuble for celebrating Mass. It represents charity, love. In this way the order of the vestments is significant: over the symbol of authority (the stole) is placed the symbol of service (the dalmatic); over all the symbol of charity is worn. This shows that the bishop's authority is to be used in service and out of love for the people in his care. By wearing all the symbols of office of priests and deacons, he also shows that he has the fulness of the sacrament of orders, and is able to confer these gifts on others by ordination.
Posted by Lancaster Cathedral at 17:29