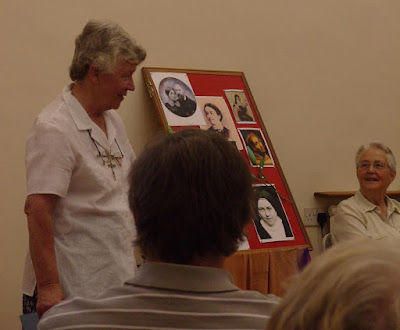 Last night people in the Lancaster area had an opportunity to learn more about the life and message of St Thérèse, in the first of a two-part mini-series called 'Curious about Thérèse?' The evening was led by Sister Zela Procter and Sister Maureen Coyne, Ursuline sisters from the community based at St Thomas More's in Lancaster. 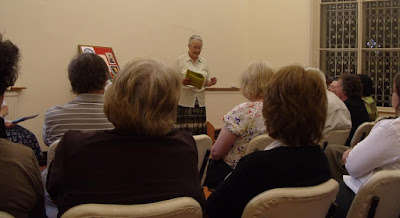 The material was imaginatively split into two parts: the first part concentrated on Thérèse's earthly family, with Sister Zela speaking about Thérèse's parents and siblings. Thérèse was the youngest of nine children, though only five survived infancy. Sister Zela made the point that for Thérèse, her brothers and sisters who had died were just as important as those she lived with. Her strong sense of heaven would be influential in her spiritual life, and in her promise to spend heaven doing good on earth, letting fall "a shower of roses". 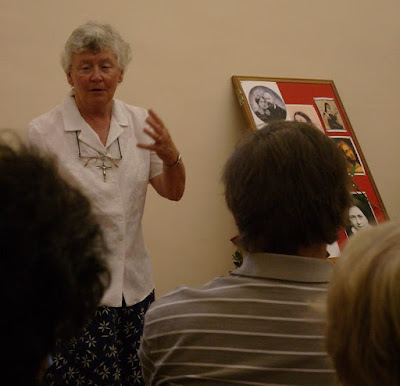 Sister Maureen then spoke about Thérèse's spiritual family, the Carmelite order. Tracing the roots and history of the order from the time of Elijah right through to the reforms of Saint Teresa of Avila and beyond, she gave us a great insight into the spiritual charism to which the young Thérèse committed herself. A second session will be offered next Tuesday at 7:30pm in St Walburga's (the 'day chapel'); all welcome. More details, and a list of other Thérèse events in the area, can be found here. Much of today has been spent on preparations for the visit, with resource packs for schools now in the final stages of preparation: they will be sent out next week. There were also two more enquiries about the visit today - interest is growing all the time.

Posted by Lancaster Cathedral at 07:30