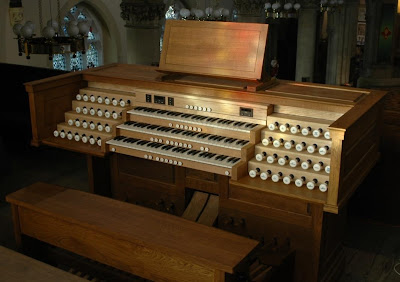 It's difficult to do a grand unveiling on a website, but this is our best attempt - today we can show you the first pictures of our new organ console. Replacing the console was not in the original organ restoration plan, but when the old console was dismantled it was found to be in such poor condition that it could not be adequately rebuilt. This is the result: a completely new console for the newly-restored organ. 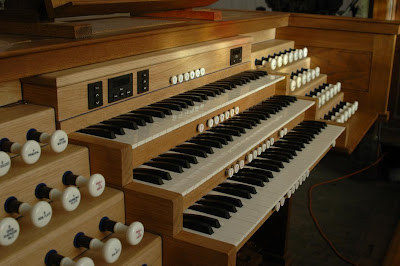 The restoration project is not yet complete, though many parts of the organ are now playable and have been tuned. The instrument will be played for the first time at Mass this weekend (you can hear it today - all being well - at 12:15pm and 6:30pm, then again at 10:30am Mass and at Vespers at 4:40pm tomorrow). Some of the stops require some further tuning and there are some other fairly minor problems to be ironed out, but the end is now in sight. 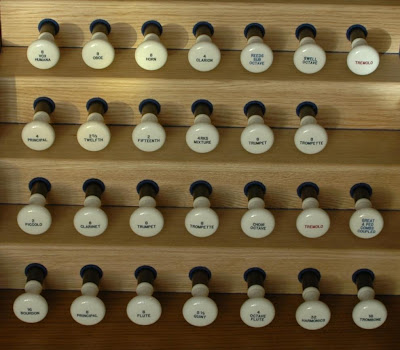 The new console has the stops arranged in a french 'terraced' style, much the same as the original console when the organ was first installed in January 1889 (Billington's Blog carried a small feature in January - click here). There are some tonal alterations, including the addition of acoustic 32-foot stops. We will provide more details in due course. 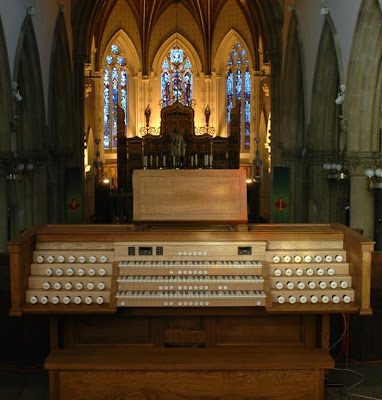 The console has also been returned to its original position; now the organist can look down the Cathedral and will get a good view of the sanctuary. We will carry a fuller feature on the organ when the work is completely finished. The restoration work is being carried out by Henry Willis and Sons, whose website can be found here.
Posted by Lancaster Cathedral at 06:42