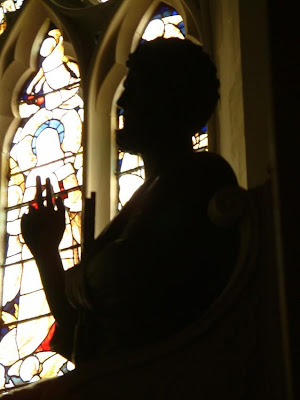 St Peter, whose statue is seen here silhouetted against a stained glass window, is to be a key figure of June at the Cathedral. It promises to be a fantastically busy month, with plenty going on and opportunities for everyone to come and take part. The Forty Hours Eucharistic Devotion takes place 11th-14th June, and is closely followed by St Peter's Walk (150th anniversary event featuring drama, music, talks etc), which runs daily at 8pm for the week 15th-21st June. One of the great highlights of this month will be the Flower Festival (26th-29th June), taking place over the weekend of the feast of Saints Peter and Paul. There'll be plenty of pictures on the blog, of course, but this really is one event that can only be appreciated by being here! Major feasts include the Holy Trinity (7th) and the Sacred Heart (19th), and our parish First Communions take place on Sunday 21st June. There are also some talks on St Thérèse of Lisieux (2nd and 9th) as we prepare for the visit of her relics - more details are given below. The full diary for June can be found here. 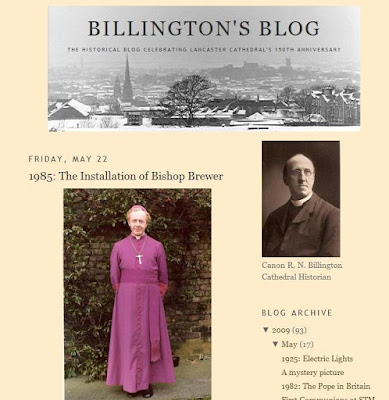 For those interested in the Cathedral's history, our historical blog for this 150th anniversary year will feature the consecration of Bishop Foley and the funeral of Bishop Brewer, victory celebrations at the end of the Second World War and a little about Dr Rigby, the priest who founded the Catholic chapel at Dalton Square. Billington's Blog can be found here. 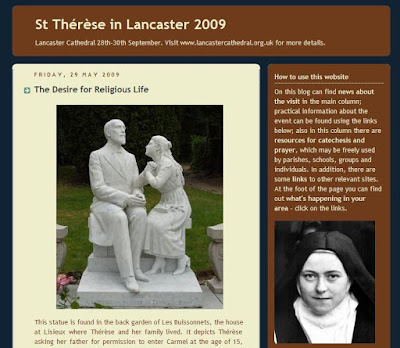 Meanwhile, with less than four months remaining until the visit of the relics of St Thérèse of Lisieux, much is going on to prepare for the visit. Two talks take place at the Cathedral (St Walburga's Chapel, Balmoral Road) this month (2nd and 9th June, 7:30pm) under the title 'Curious about Thérèse?'; there is also a session on the saint's spirituality at St Thomas More's, Lancaster, on Monday 8th at 7:30pm and a day at Ladyewell led by Canon Luiz Ruscillo (June 13th, free of charge; please call the Education Centre on 01524 841190 to book). Slightly later than we had hoped, resources will be going to every Catholic school in the Diocese in the next fortnight, and some of these will be made available online. We will also be appealing for stewards and other helpers in the near future. Lots more to come... keep an eye on the Thérèse blog or visit the Thérèse section of the Cathedral website to stay up-to-date.

Posted by Lancaster Cathedral at 07:28