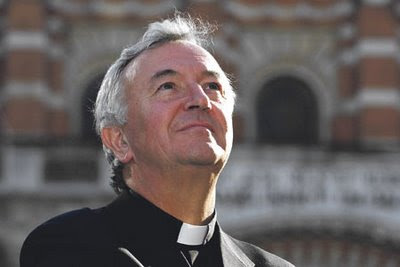 Archbishop Vincent Nichols stands outside Westminster Cathedral. It's a scene with which we will become much more familiar in the years ahead: it's just been announced that Archbishop Nichols is to become the new Archbishop of Westminster. He takes over from Cardinal Cormac Murphy-O'Connor, who will retire at the age of 76. The announcement, which was made at Archbishop's House in Westminster, ends months of speculation. 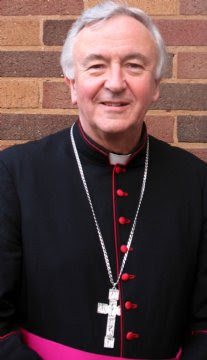 Vincent Nichols was born in Crosby, Liverpool on 8th November 1945. Having been ordained priest in 1969 he went on to become an auxiliary bishop of the Westminster Diocese, with special responsibility for the north London area. On 29th March 2000 he was installed as Archbishop of Birmingham, a role in which he has impressed many. He has been particularly noted for his ability with the media - something which is an ever-greater necessity in the role which he is to take on. 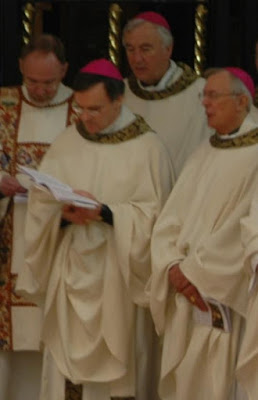 The Archbishop was here in Lancaster for Bishop Campbell's ordination last March. He can be seen here (at the back of the picture) with some of his brother bishops. 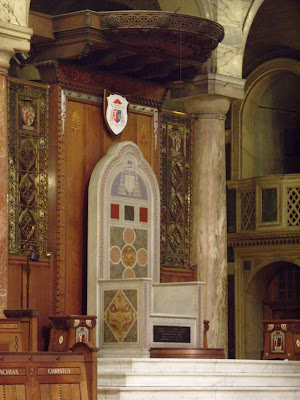 This is the chair he has to fill: the cathedra in Westminster Cathedral. His return to Westminster is likely to be popular, though his task will not be an easy one. The media often refer to the Archbishop of Westminster as 'the head of the Catholic Church in England and Wales'; this is not true - in fact, the Archbishop has no jurisdiction at all in most of the country. There is no doubt, however, that he has an important leadership role and often acts as a spokesman for the whole country; all of Archbishop Nichol's skills will be needed in the coming years. Traditionally the Archbishop of Westminster has always been made a cardinal, though we may have to wait a few years - Cardinal Murphy-O'Connor retains his voting rights until he is 80 years old, and the new man in Westminster is unlikely to get his red hat before then. 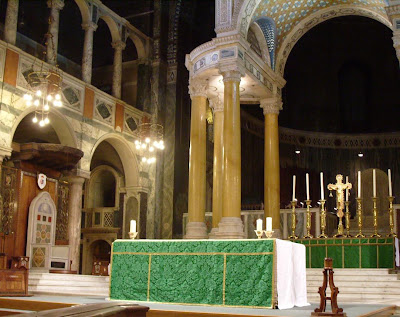 Speaking about the appointment, Archbishop Nichols said, "I feel a real need to acknowledge my openness to and dependence on God above all else. But in this I am not unique. Everyone who seeks to follow the ways of God learns to depend on the truth, love and compassion of God more than on their own strength. I know that as I prepare to take on this new office in the Church many people will pray to the Lord that I will be strengthened for this task – and that is what I definitely need." You can find more about Archbishop Nichols' appointment at the Diocese of Westminster website: click here to take a look.
Posted by Lancaster Cathedral at 11:02