More from the Chrism Mass 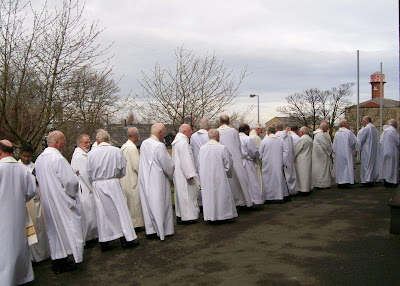 As promised, here are a few more pictures from Maundy Thursday's Chrism Mass - already (can you believe it?) 11 days ago. As can be seen here, the rain held off for long enough for the priests to make their way from the Social Centre (where they vested) to the Cathedral. 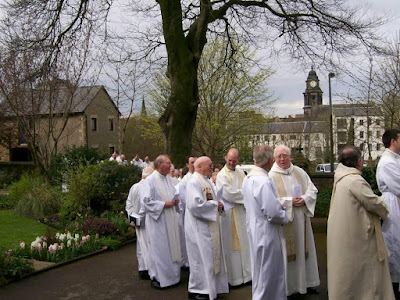 The clergy often use these opportunities to catch up on each other's news - the stroll through the garden is a perfect opportunity for a brief pre-Mass chat! 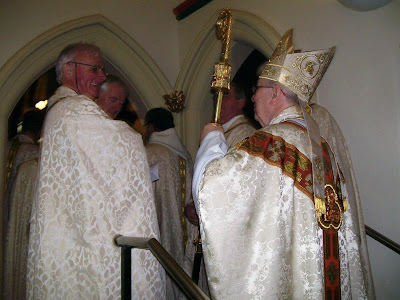 Here the Bishop, about to enter the Cathedral for his last Chrism Mass in Lancaster, shares a joke with some of the Canons. 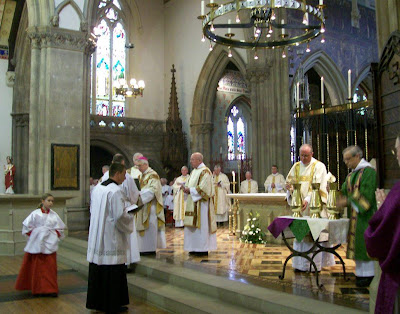 Inside the Cathedral attention is turned to more serious matters: the blessing of the oils and consecration of the Chrism, and the renewal of the priests' commitment to service. Having been brought up with the bread and wine to be used at Mass, the oils are placed at the front of the sanctuary. 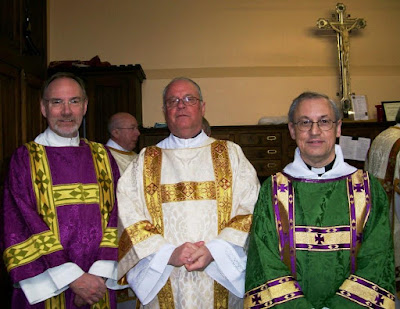 Three deacons - pictured here - carry the oils. The deacon in green carries the oil of Chrism, the one in white the oil of catechumens and the one in purple the oil of the sick. After Mass the oils are then distributed to priests for use in parishes across the Diocese. 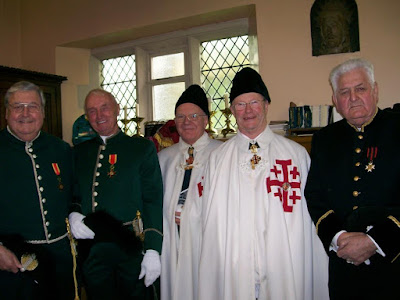 These photographs come to us courtesy of the Catholic Voice of Lancaster, the Diocesan newspaper, and were taken by the paper's editor, Edwina Gillett. Before Mass she also managed to get a picture of some of the papal knights, seen here. Many thanks to Edwina for sharing these pictures with us. The Chrism Mass will be featured in the next edition of the Catholic Voice, which will be published at the end of this month.
Posted by Lancaster Cathedral at 06:55