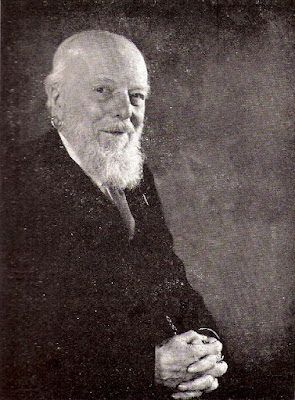 This is Dr J. H. Reginald Dixon, the eccentric but brilliant organist who oversaw music at the Cathedral 1909-1971. He came in the church's golden jubilee year, at a time when Canon Billington was the rector of St Peter's, which was still just a parish church. During his time he saw the church raised to Cathedral status when the Diocese of Lancaster was founded in 1924, the consecration of four bishops and many other important occasions. He was a part of many people's lives, playing the organ at countless weddings, funerals and Sunday Masses. He contributed greatly to the cultural life of Lancaster, founding and supporting musical societies and playing an organ recital for the visit of King George V in 1912; he also composed a march when Lancaster was given city status in 1937. Next Wednesday is the 100th anniversary of his appointment here. The centenary is being marked by a festival featuring the following events: Tonight at 7:30pm a talk on his life by Joan Johnson, his last student (free); Tomorrow (Saturday) at 8pm a concert of his music performed by local musicians (tickets £8/£6 concessions); Wednesday 20th at 7:30pm the first annual Dr Dixon Memorial Organ Recital - Joan Johnson performs some of his finest organ works (entry by donation). Dr Dixon is a legendary figure here: why not come along and enjoy his leagacy?

Posted by Lancaster Cathedral at 07:42