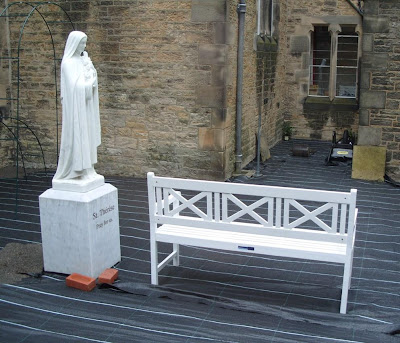 Last week work began on the new St Thérèse cloister garden at the Cathedral. The early stages of the work involved clearing some of the earth and gravel which were already there and removing a very persistent weed which has been growing in the area for some time. A large ground sheet has been put over the whole area in an attempt to prevent the weed's return. 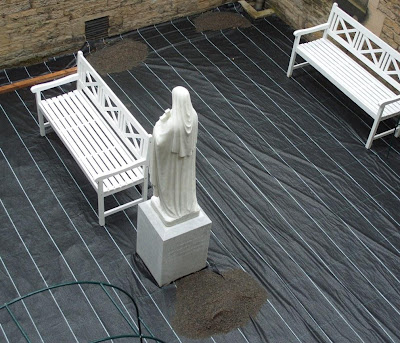 Now that this part of the work is complete, the task ahead is to lay new sand, gravel and flags in accordance with the design (see the plans here). After that the plants will be brought in. A couple of pieces of garden furniture have already arrived, as can be seen. It's been decided that Vespers on Sunday 27th September (the day before the visit to Lancaster begins) will end with a procession to the new garden; this is likely to be its first public use.

Meanwhile, the Bishops' Conference have announced that 18th-24th October 2009 will be designated 'Little Way Week', in which each of us is invited to perform a small act of service each day, inspired by the example and teaching of St Thérèse's 'Little Way'. It is the first national initiative aimed at following-up the visit. More can be found on their website (here), and the Thérèse Blog will keep you updated over the coming weeks.
Posted by Lancaster Cathedral at 08:40