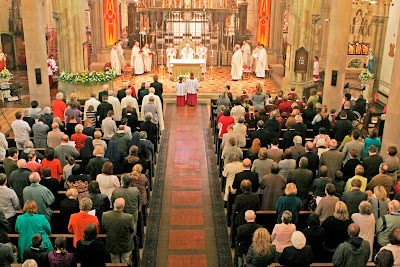 Yesterday morning the Cathedral was packed for the 150th anniversary Mass. Each year the feast of the Dedication is kept on the Sunday closest to 4th October, the day of consecration; happily this year the feast fell on the day itself. 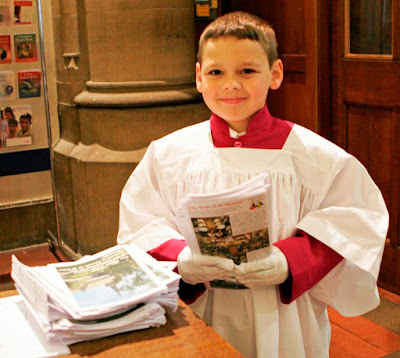 Some people had more than one job! Jack, one of our altar servers - seen here dressed in one set of the new cassocks and cottas bought for the anniversary - helped to welcome people to the Cathedral. A number of other children from the Cathedral School also helped, and many more were present at the Mass. 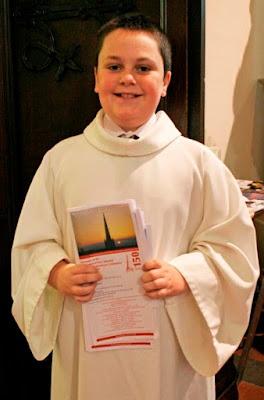 Linus, one of our young choristers, also lent a hand. Here he is seen clutching copies of the special 150th anniversary newsletter. The choristers were all present and sang at the Mass, working alongside our ladies' choir, who led the singing throughout. 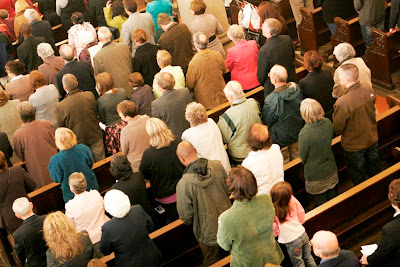 Most of the people who were present were parishioners; some regularly attend one of the other Masses but had made a special effort to be present at the 10:30am celebration on this feast. 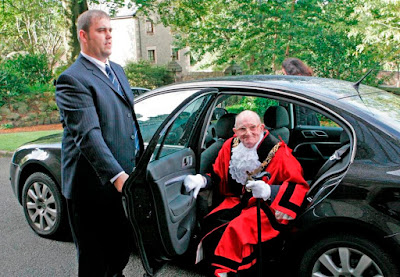 The Mayor of Lancaster, Councillor Roger Sherlock, was present at the Mass. Among other invited guests were several bishops: Bishop Tom Williams and Bishop Vincent Malone (both of Liverpool), Bishop Brian Noble of Shrewsbury, who grew up in the Cathedral parish, and Bishop Malcolm McMahon of Nottingham, who preached; in this he followed in the footsteps of his predecessor, Bishop Richard Roskell (2nd Bishop of Nottingham), who gave the sermon when the church was opened in 1859. It was also a great pleasure to see Bishop O'Donoghue back with us; he has been here all week, for the visit of the relics of St Thérèse, and stayed on for the dedication feast. Among the concelebrating priests was Fr Anthony Keefe, who grew up in Lancaster and who for a time worked at the Cathedral parish. 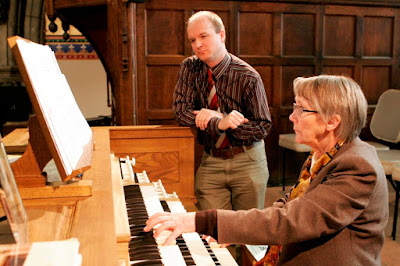 Other figures from the Cathedral's past also returned. Joan Johnson, who was the last student to be taught to the play the organ in the Cathedral under Dr J. H. Reginald Dixon, came and played a couple of pieces before Mass. Joan has become a great friend of the Cathedral in recent months, and played a big role in the Dr Dixon music festival in May. Here she is seen at the new console, with our Director of Music, Damian Howard, looking on. 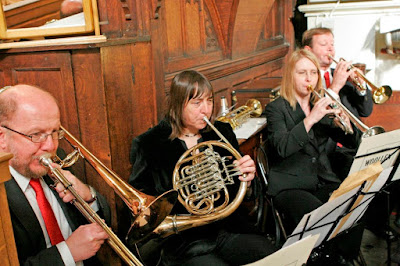 Damian had also recruited some local brass players, who opened the Mass with a fanfare by the Belgian composer Flor Peeters. Their musical contribution gave the celebrations an extra lift. 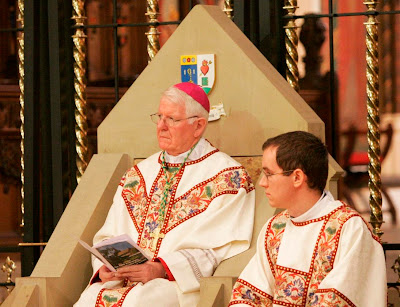 The future of the Church was also very much in evidence; we have already noted that many children were present. Also helping out was Rev. John Moriarty, a deacon currently studying at Ushaw College. John will be ordained priest next summer. Here he is seen, with Bishop Campbell in the cathedra behind. More on the Mass in tomorrow's post, with pictures of the Rosary and Vespers to follow later in the week. Thanks to George Coupe, who photographed the events of the day for the Cathedral.

Posted by Lancaster Cathedral at 19:14