St Thérèse: the tour is complete 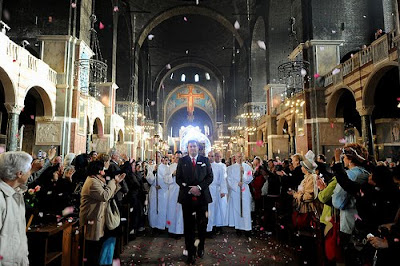 After a month travelling England and Wales, the relics of St Thérèse leave Westminster Cathedral. This was the scene on Thursday afternoon as the tour came to an end. 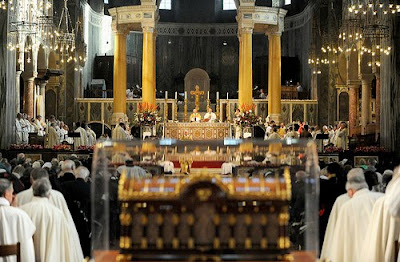 At the departure Mass was celebrated in the Cathedral. Something close to 100,000 had visited the reliquary in Westminster; among them - according to reports - was former Prime Minister Tony Blair. The tour has been extraordinary, and has united people from all walks of life: politicians and prisoners, the old and young, healthy and sick, people of different faiths. 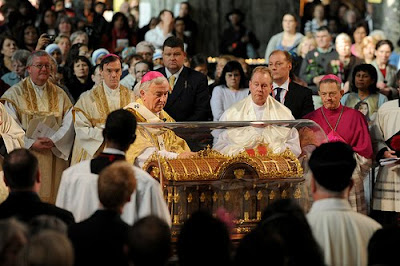 Among the last to venerate the relics was Most Rev. Vincent Nichols, the Archbishop of Westminster. Here he is seen with the reliquary just before its departure. 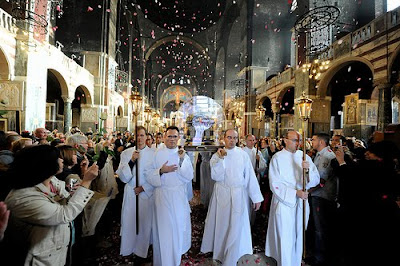 A shower of rose petals fell inside the Cathedral as the relics were carried out. Official figures estimate that 285,000 people had seen the relics around the country. 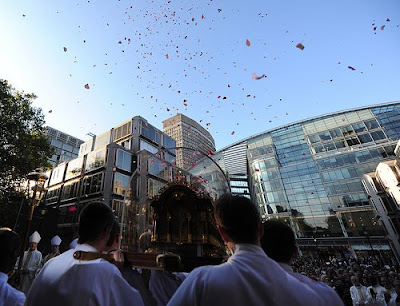 There were petals outside, too, as the reliquary made its way into the Cathedral Piazza just off Victoria Street. Large screens in the Piazza had been showing live images from inside the Cathedral during the visit - a facility no doubt greatly appreciated by the many who had to queue outside. 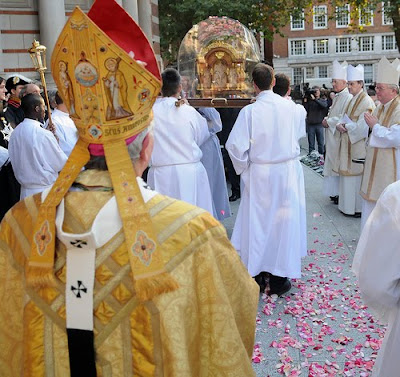 Here the Archbishop follows the reliquary outside; Westminster's auxiliary bishops (among them Bishop Bernard Longley, who will soon take over as Archbishop of Birmingham) line the route, with Papal Knights visible on the other side. 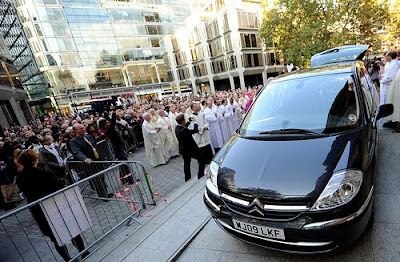 With that, the hearse was loaded for one last time as a great crowd in the Piazza looked on. A few weeks ago it would have been hard to predict the extraordinary events of the last month. The many pictures we have seen have told one, very public, story; alongside this there are countless thousands of individual stories which will be being told for many years to come. 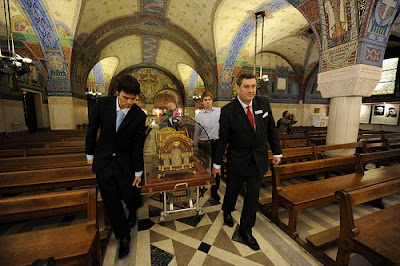 Yesterday the relics arrived back in Lisieux; here they are seen in the crypt of the town's Basilica. Adrian Forsey, the funeral director who had overseen their transportation during the UK tour, is seen wearing the red tie. 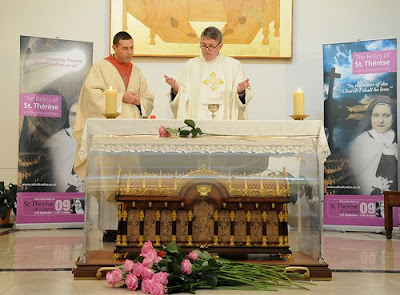 Finally, in the Blessed Sacrament Chapel at the side of the Basilica, the relics rest before the altar. Mass was celebrated by Monsignor Keith Barltrop, who had the unenviable task of overseeing the entire visit. His work, and the work of his team, has certainly paid off.
Posted by Lancaster Cathedral at 14:12