The Papal Audience I 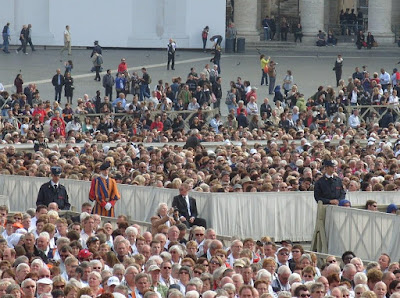 Today we begin a two-part look at the Papal Audience, which was one of the highlights of the parish pilgrimage to Rome. The group attended the weekly event on Wednesday 28th October, and all of the photos in these posts were taken at that event. 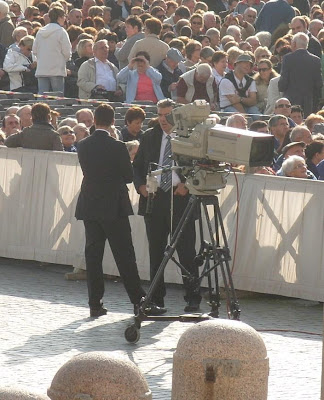 There's quite a sense of occasion at the Audience, and crowds begin to gather long before the Pope arrives. Our group were there about two hours before the Audience began, but the time seemed to go quickly, helped by the singing of some nearby groups. There was also much to see, as people watched St Peter's Square filling up with pilgrims, and various preparations being made. The event is televised each week on the international Catholic channel EWTN, and clips are often shown on other channels and on the internet. The Vatican's own television service provides the coverage and their cameras could easily be spotted. 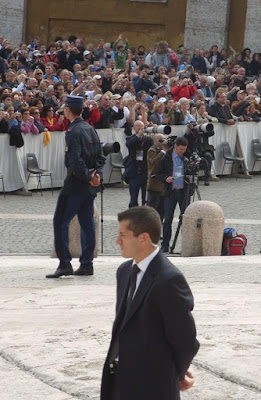 There were plenty of other media people attending as well; towards the rear of this image you can see photographers in action. Security is necessarily a big consideration at these events: you can see a Vatican policeman and another security officer in this picture, and everyone who gets into the square has to pass through airport-style security checks. 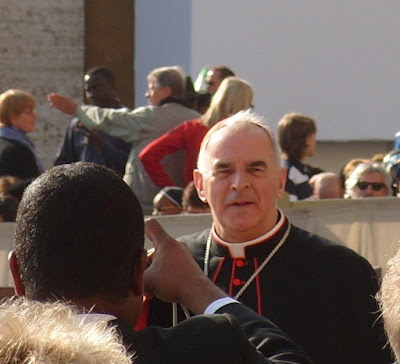 It's never much of a surprise if you see a face you recognise at the Audience, and our cameras spotted Cardinal Keith O'Brien, Archbishop of St Andrews and Edinburgh, attending. Seminarians from the Scots College in Rome were also present, and were among those who were presented to the Pope after the Audience. 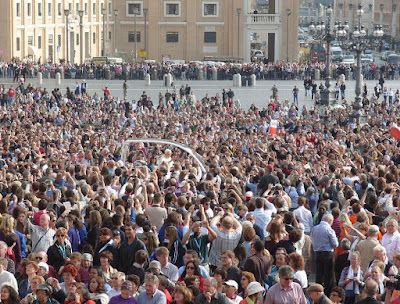 After two hours of waiting the group had their first glimpse of the Holy Father, as the Popemobile appeared at the side of the Basilica. The Pope was then driven around the square, giving as many people as possible the chance to see him close up. Aside from those who had tickets, a fairly large crowd also gathered along the railings at the edge of St Peter's Square, as can be seen towards the back of this picture. 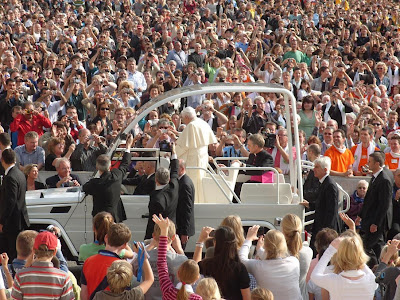 All the cameras were out as the Pope was driven past. It is quite an amazing scene, but is even more impressive when you consider that this happens every week. 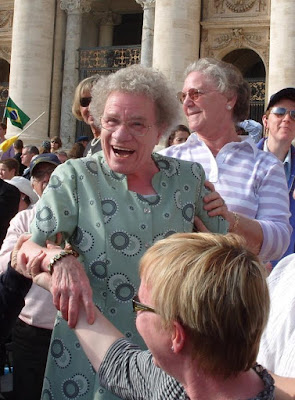 Everyone in our own group managed to get a good view of the Holy Father, even if some had to climb on a chair to see him! 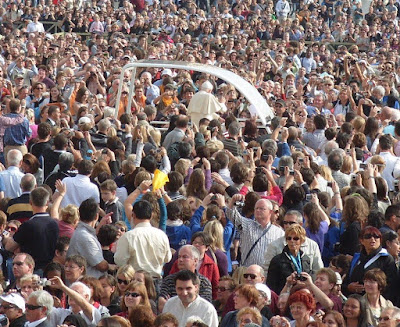 A great crowd of people from all over the world were present. Near our own pilgrims there was a group from Bolivia to the right, and a Brazilian choir off to the left of them. A range of flags and colours could be seen. The Catholic - the universal - Church, gathered around her leader. Tomorrow we will cover what happens during and after the Audience itself.
Posted by Lancaster Cathedral at 06:16