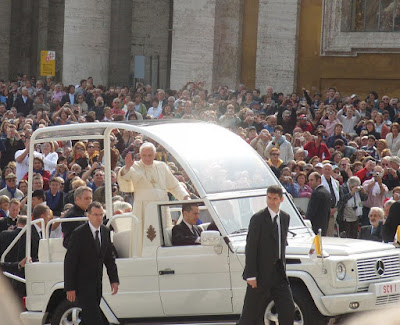 Having completed a tour of St Peter's Square in the Popemobile, the Holy Father is then driven to the platform in front of the Basilica, from which his catechesis is delivered. 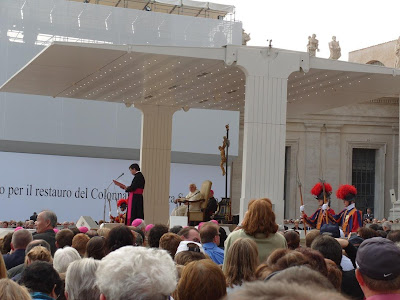 After delivering his address in Italian, the Pope then greets people of other languages and delivers a summary of his words to each language group. Here a priest announces some of the groups which are present at the audience; the Pope remains seated, with two Swiss Guard standing on either side. 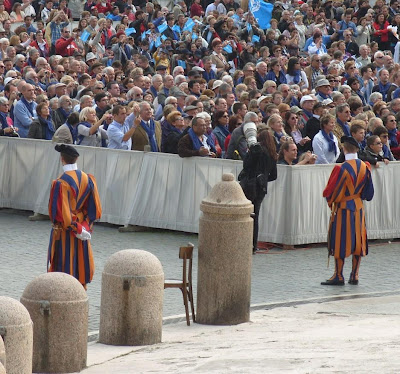 Although many of the Swiss Guard wear their ceremonial dress for occasions such as this, they are there primarily to protect the Pope and stand on constant guard while the Holy Father is out in public. 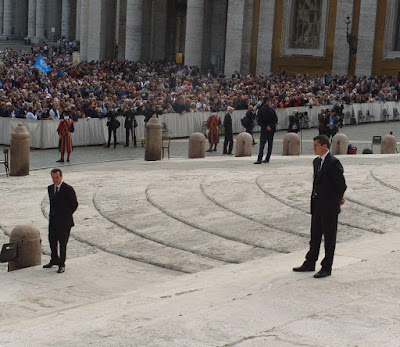 They, and other officials, keep a careful eye on the crowd. It must be a formidable challenge to allow so many people to gather so close to the Pope, while at the same time protecting him and ensuring the safety of the crowd. 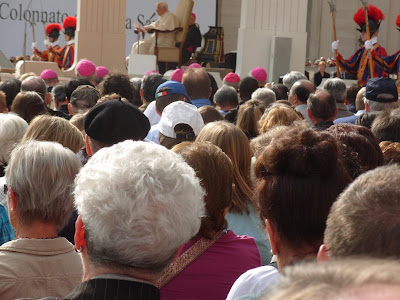 Generally the Pope delivers a series of talks on a certain theme, and currently Pope Benedict is speaking about the great theologians of the Middle Ages. During the Audience that our group attended he spoke about Monastic and Scholastic Theology, noting that monastic thought was focused largely on reading and understanding the Word of God contained in the Scriptures, while Scholastic Theology had at its heart the relationship between faith and reason. The full text of the Audience can be read in English here; you can also see a short video in the post below. 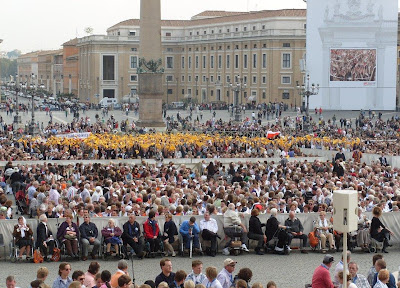 In several languages groups are announced at the Audience, and our own Cathedral group topped the list of parishes listed in the English language section. When each group is announced they usually give a cheer (some also sing a short song!) so that the Pope can see where they are and signal his greeting. At the Audience the Cathedral was given its full title, "The Cathedral Church of St Peter, Prince of the Apostles, Lancaster" and the Pope duly waved in our direction. Some groups also bring flags to wave, such as the large group seen near the obelisk in this image. 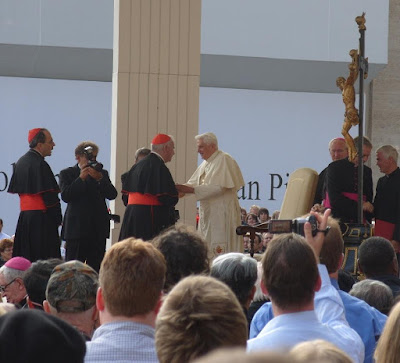 Immediately after speaking the Holy Father leads the singing of the Our Father, after which he gives his blessing to those gathered and to their families. At the end of this time of prayer he then greets some of the special guests at the Audience: first the Cardinals - here we see Cardinal O'Brien meeting the Pope... 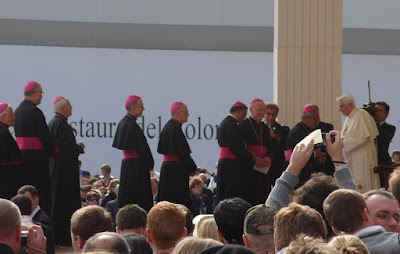 ... and then any bishops who are present. After this he usually walks over to a special area where other guests are gathered: among them newly married couples, other people attending for a special reason, and - at our Audience - seminarians from the Pontifical Scots College in Rome. 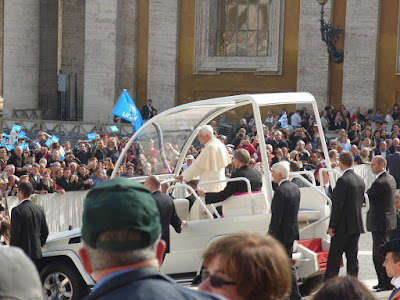 When the greetings are over the Popemobile returns and the Pontiff is driven away, back to his residence. This is a last chance for those nearby to see him close up. 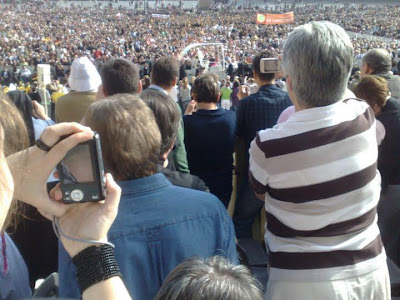 Many members of our group had cameras at the ready, hoping to get a good view of the Pope!
Posted by Lancaster Cathedral at 07:12