The Ursuline Sisters, towards 475 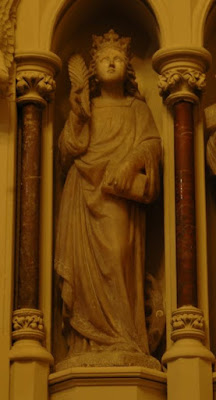 Today is the feast of St Catherine of Alexandria, the virgin martyr who famously was almost put to death on a wheel. When this method of execution (which gave us the term 'catherine wheel') failed, she was beheaded. The image above shows a statue of her on the reredos of the Cathedral's Sacred Heart altar. In the Middle Ages St Catherine was extremely popular, and it was on this feast in 1535 that St Angela Merici chose to found her company of religious women, which bears the name of another virgin martyr, St Ursula, who also enjoyed great popularity at the time. Angela founded her company in Brescia, Italy (more recently famous as the home town of Pope Paul VI) to enable women to live consecrated lives in their own homes and keeping their occupations. At a time when women were expected to choose between a husband or a cloistered life, it was a daring move! As the company required no dowry, it was open to women of all social backgrounds. 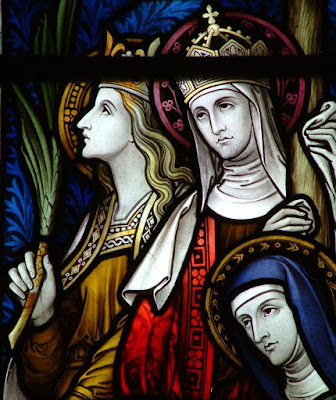 There are also two stained glass images of St Catherine in the Cathedral: this one (she is seen here on the left, holding the palm branch of martyrdom) in the Te Deum window, and one in the Whiteside Chantry (see here). With today's feast and the anniversary of the foundation of the Ursulines, the order now begins its 475th year, a milestone which is particularly important to our parish, as we are currently served by three Ursuline sisters. Congratulations to them and to all the members of the Ursuline family; we will feature more on the Ursulines' anniversary later in the year progresses.

Posted by Lancaster Cathedral at 06:54