The Basilica of San Clemente 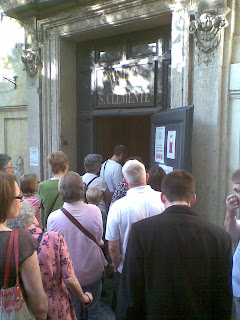 The group has just had a tour of San Clemente, one of Rome's most important churches. It dates from the 12th century, but is built over the remains of a 4th century church and - beneath that - a temple of Mithras from the 1st century BC. Next the group will celebrate Mass in a nearby church.

Posted by Lancaster Cathedral at 15:39