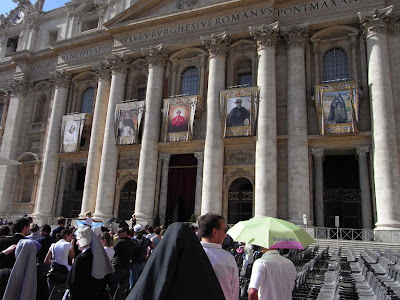 Last Sunday Pope Benedict canonised five new saints at St Peter's Basilica in Rome. While Pope John Paul II canonised a great many saints during his pontificate, the rate of canonisations has slowed under Pope Benedict. Our man in Rome sent us some pictures earlier this week. 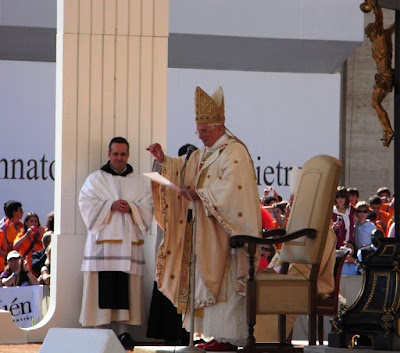 Here the Pope is speaking after the Canonisation Mass, delivering his usual Sunday Angelus address and blessing. 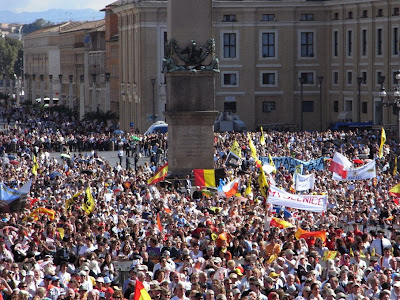 Although Mass was celebrated inside the Basilica, a huge crowd also gathered outside, such was the number of people who wished to attend. Among those who were canonised were the priest known as 'Fr Damien', famous for his ministry to lepers on the Hawaiian island of Molokai in the 19th century. During his work he caught the disease, and died on the island in 1889. 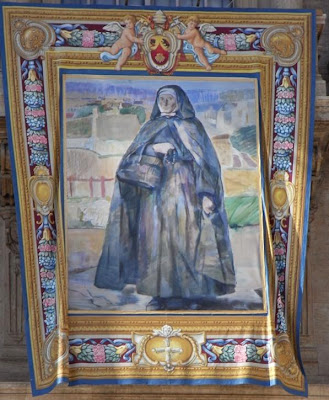 Also canonised was Jeanne Jugan (Sister Marie de la Croix), who founded the Little Sisters of the Poor. The order has a house in our Diocese in Preston, and members of the community travelled to Rome to be present at the canonisation. The order cares for the elderly and is currently active in over 30 countries worldwide. 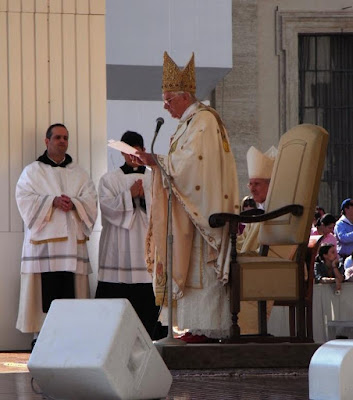 At the solemn canonisation of the saints, the Holy Father declared: "By the authority of our Lord Jesus Christ, the Blessed Apostles Peter and Paul and by Our own authority, after mature deliberation and having called once again for Divine help and having listened to the advice of many of our brothers in the Episcopate, we declare and define to be Saints the Blesseds Sigmund Felix Felinski, Francisco Coll y Guitart, Joseph Damian De Veuster, Rafael Arnaiz Baron and Marie of the Cross Jugan and we write them in the Catalogue of the Saints." A week tomorrow our parish pilgrimage to Rome begins, and - technology permitting - we will provide extensive coverage during the pilgrimage here on the Cathedral blog.
Posted by Lancaster Cathedral at 07:15