The feast of St Thérèse 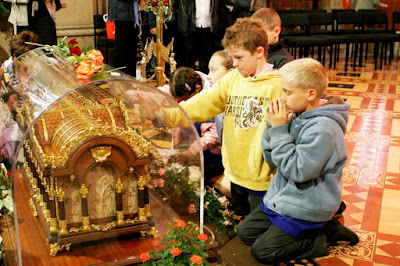 Today, which is the feast of St Thérèse of Lisieux, we feature some images of the school groups who visited her relics here in Lancaster. 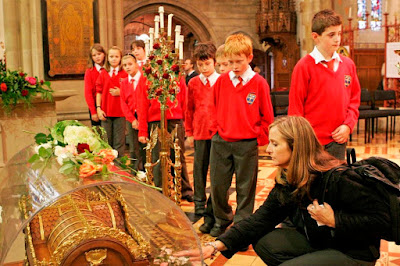 While a visit over three weekdays was not ideal for people who are working, it did have the advantage of allowing many children to come on school visits. They came from all over the Diocese, with groups from - amongst others - Wigton, Workington, Windermere, Preston, Whitehaven, Penrith and Cleveleys. A school group from Blackpool were among those who greeted the relics, and several schools were represented at the departure liturgy. Our own Primary School and two other Lancaster schools sent groups for the visit. 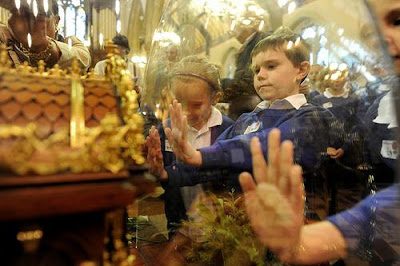 It is striking that children seemed to feel immediately at home with the spirituality on display during the visit. Many simply touched the reliquary in a moment of prayer; it is a simple, wordless gesture - a very personal moment spent with a saint. 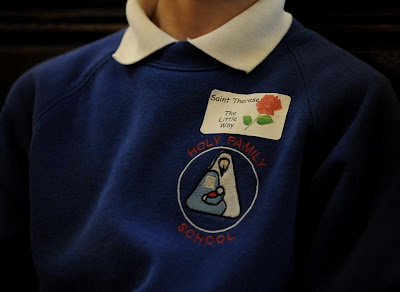 Many of the visiting schools had spent time preparing for the visit and learning about the life of St Thérèse. Children from Holy Family, Barrow, who were at the Mass and departure liturgy yesterday morning, wore their own 'Little Way' badges. Many schools who were unable to send groups have also been looking at Thérèse and her message, making use of an educational CD-Rom prepared and sent out by the Cathedral in June. 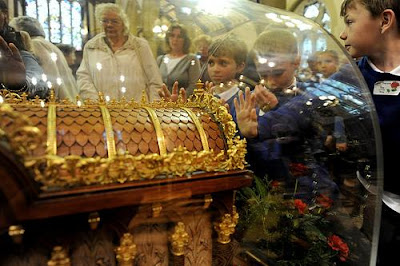 Young stood alongside old to venerate the relics; people from all parts of the Diocese and beyond were together in this act. Each had their different reasons for being present, but the result was a powerful sign of St Thérèse's - and the Church's - ability to unite. 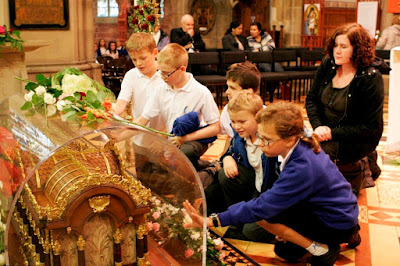 Teachers and pupils, too, were one in the act of pausing for prayer at the shrine of St Thérèse. 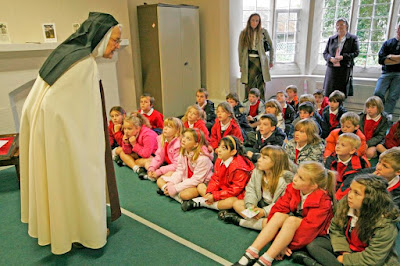 Unseen by most of the public, on Tuesday an educational programme was running all day, and demand was such that a number of schools were unable to get places, as slots were quickly filled. After arriving at the Cathedral Primary School the children went to the Diocesan Education Centre for an introductory session led by Cathedral catechist Ann-Marie Houghton; this helped to set the scene and prepare them for visiting the relics, which followed. Then it was on to our 'Carmelite Cell' (pictured above). 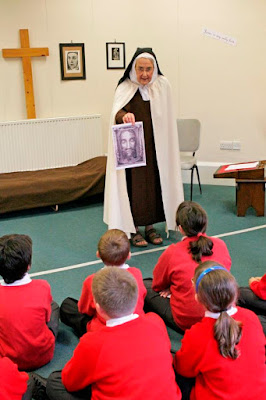 Here children from St John's Primary School, Poulton-le-Fylde, look at an image of the Holy Face, one of Thérèse's great inspirations. This session was led by our own Sister Zela, who played the role of 'Sister Marie of the Trinity and of the Holy Face', one of Thérèse's novices. Children could then ask about life in Carmel and about St Thérèse herself. After this, the final workshop involved making a flower out of art materials; this session was designed to help children understand some of Thérèse's use of the rose as a symbol. It has great beauty, but also thorns: in this way it is like life, which includes both beauty and suffering. 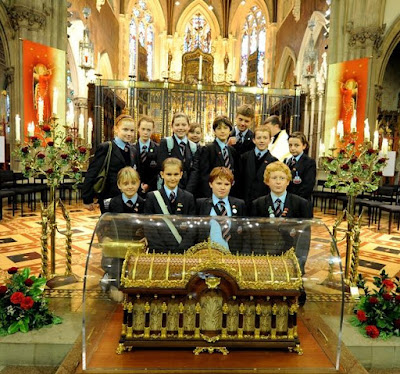 A small group from St Bede's High School, Lytham, posed for a photograph at the reliquary just before its departure yesterday morning. Seven schools were represented at yesterday's departure liturgy, including a group from near Clitheroe, who were amongst the last to venerate the relics (below). 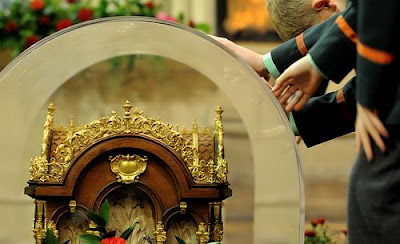 Children from the Cathedral school played a great part in the visit, both welcoming the relics and being present when they left. We will have more on the visit soon, but in the meantime you can see a couple of photos of the arrival of the relics on the Cathedral School blog, here.
Posted by Lancaster Cathedral at 08:22