The Basilica of the Holy Cross 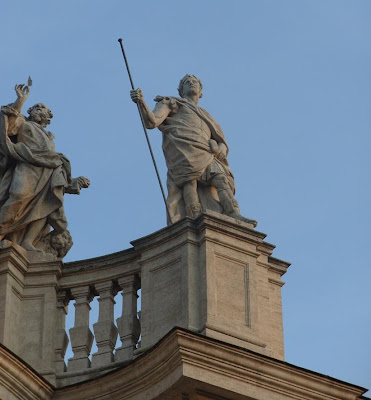 This is the Emperor Constantine, who appears on the blog today to signal a return to coverage of the Rome pilgrimage. Constantine became the first Christian emperor when he converted in 312, and after this date the Roman Empire began to embrace the Christian faith. It's no surprise, therefore, to find his statue on the facade of a church, and this image is from the 'Basilica of the Holy Cross in Jerusalem', a church not far from the Lateran Basilica in Rome. 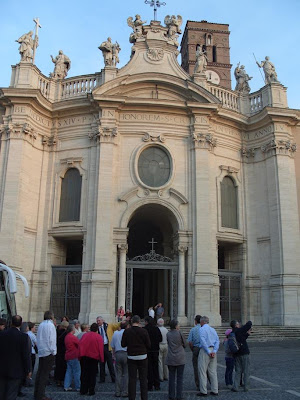 Our parish pilgrims visited the Basilica after their day at Subiaco, and are seen here being given a few insights before entering the church. 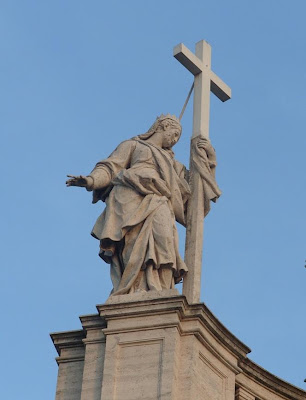 The basilica owes much to this lady, St Helena, the mother of Constantine. She travelled to the Holy Land to search for relics of the Passion of Our Lord and came back with the true cross and other items associated with the suffering and death of Jesus. 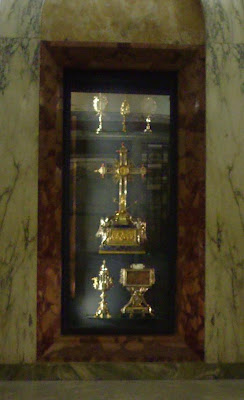 Inside the Basilica today, therefore, you can see reliquaries containing relics of the Passion: pieces of the cross, the nails, the crown of thorns. These objects have been the focus of devotion for many centuries, and are displayed to provide us with a phyisical link to the Lord Himself. Helena even brought back large amounts of earth from Jerusalem, so that the church containing the relics could be built on the ground upon which Jesus had walked. 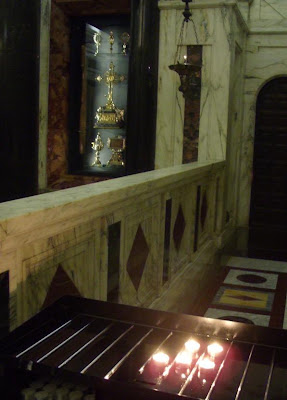 Near the reliquaries there were places to light votive candles, and some members of the group took the opportunity. Canon Stephen also led some prayers in this small chapel. Relics of the cross have been sent to many parts of the world, and our neighbouring parish, St Joseph's in Skerton, has such a relic. There are also four relics at Westminster Cathedral, one of which is situated at the top of the tower; you can find an interesting piece on these relics written by Monsignor Mark Langham, former Administrator at Westminster who now lives and works in Rome, by clicking here. 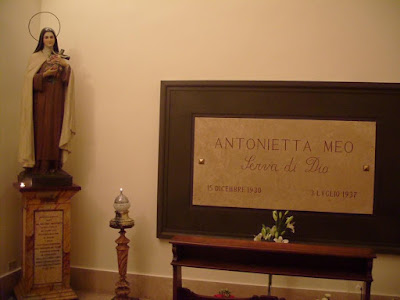 A short distance away from the relics, still within the Basilica, is the tomb of a little girl who shared in the Lord's suffering when her life was cut short by illness. Antonietta Meo lived in the local parish in the 1930s and was less than seven years old when she died, but during this short life she wrote letters to Jesus which display a profound - if simple - faith. Her cause for canonisation is open and she has been declared a 'Servant of God'. Next to the tomb is a statue of someone else whose life was also short yet filled with insight: St Thérèse of Lisieux. You can find out more about Antonietta on the website set up to promote her cause: click here.
Posted by Lancaster Cathedral at 07:27