The Feast of St Andrew 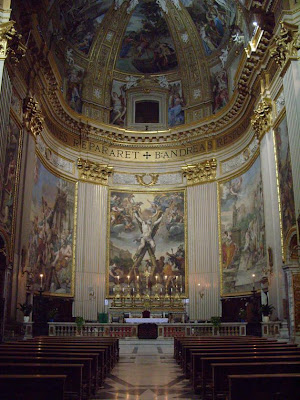 Today is the feast of St Andrew, brother of our own patron St Peter and patron of - among others - Scotland, Russia and Greece. The pictures here were taken on the recent parish trip to Rome, and show the church of San Andrea della Valle. It wasn't on the list of churches visited by the group, but seems worth sharing today all the same. Built in a Baroque style similar to St Peter's Basilica, and with Rome's second largest church dome after the Vatican, it seems a fitting 'brother' to the basilica dedicated to St Peter. 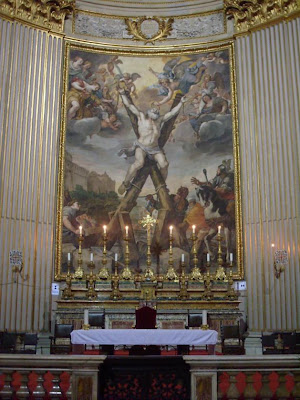 The large painting above the high altar shows the crucifixion of St Andrew, which according to tradition took place on an X-shaped cross. This, of course, is the origin of the shape of the Scottish flag. 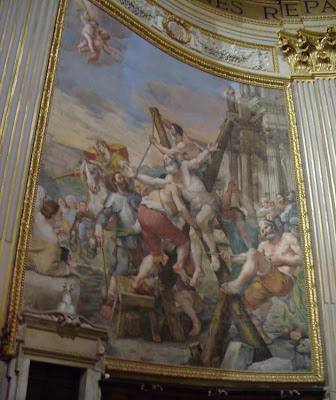 Two large paintings to the left and right of it show him being lifted onto his cross... 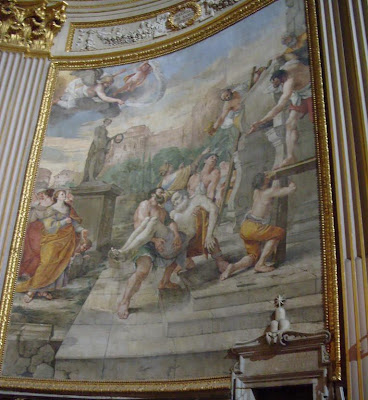 ... and him being taken down after his death. Aside from the tradition surrounding his death, much was written about his life and he is, of course, a prominent figure in the gospels. Although he is not mentioned frequently, he is important in that he is understood to be the first of the twelve apostles to follow the Lord, and even introduced his brother, Peter, to Jesus with the words, "We have found the Messiah" (John 1:41). In St John's account of the feeding of the 5000, it is St Andrew who brings the loaves and fish to Jesus (John 6:8-9). Visiting Scotland in 1982, Pope John Paul II made reference to this incident, saying that it teaches us to bring our gifts, however small, to the service of God, and allow Him to do the rest.
Posted by Lancaster Cathedral at 08:21