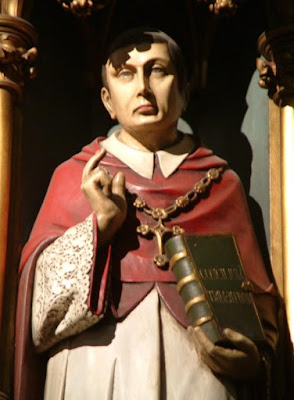 It may seem very early to interrupt the blog's extended coverage of the Rome pilgrimage (more on that tomorrow), but today is the feast of St Charles Borromeo, who deserves a post not least because he's missed out on a mention for the last two years (in 2007 his feast fell on a Sunday, and last year it was usurped by the November Chapter Mass). 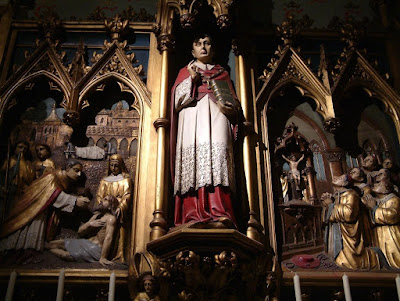 The Cathedral has a wonderful chapel of St Charles, and the altar here will be used for the 12:15pm Mass today. The altar was consecrated in 1860 but the reredos and other decoration date from the golden jubilee of the church in 1909. Billington's Blog will feature more on the altar and its history tomorrow. 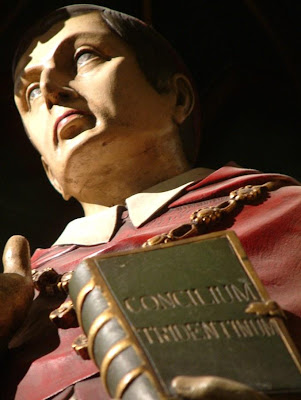 Charles Borromeo was born on 20th October 1538; at the age of 21 he was made a Cardinal by Pope Pius IX (who also happened to be his uncle!) and later became Archbishop of Milan in 1563. His life, therefore, was set in the period of the Counter-Reformation, when the Church was responding to the growing challenge of Protestantism. Among St Charles' greatest contributions was his influence on the Council of Trent, which had been called to discuss the challenges facing the Catholic faith. Here he is seen holding a copy of the decrees of Trent. 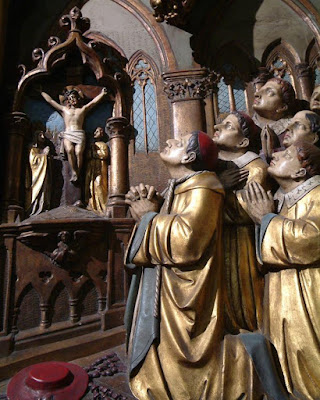 St Charles is often depicted as a penitent, as here: he prays before a crucifix with a rope around his neck. This reminds us of his work as Archbishop of Milan, where he set about improving the morals of the clergy under his authority and promoting a more faithful way of life. In the best sense of the word, he was a reformer: someone who wanted to do away with the failings of Church members without straying from orthodox doctrine. His efforts earned him some opposition, and on one occasion he survived an assasination attempt. 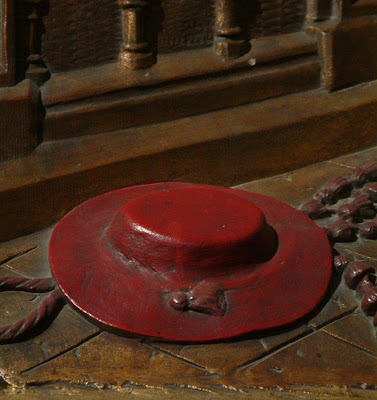 By his side a cardinal's hat, a sign of his high office, can be seen on the floor. 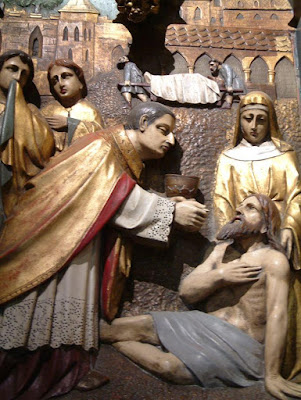 Although both a cardinal and an archbishop, Charles did not shy away from the people of his city even in the midst of danger. In 1576 Milan was gripped by plague, and the altarpiece here shows him risking his own life by bringing Holy Communion to the sick and dying on the city streets. 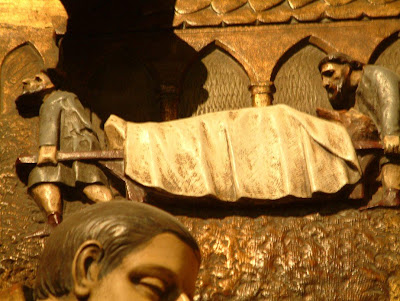 The reredos of his chapel in the Cathedral depicts those who have not survived the plague being carried away in the background... 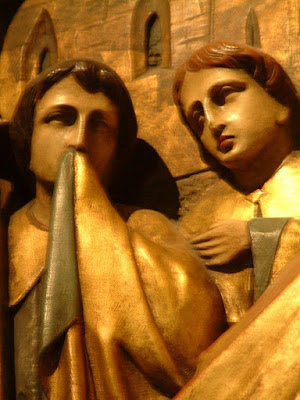 ... while the city is filled with the stench of death and disease. All in all, the altar depicts a man of great vision and commitment, one who was not afraid to take on opposition or to shy away from his people. 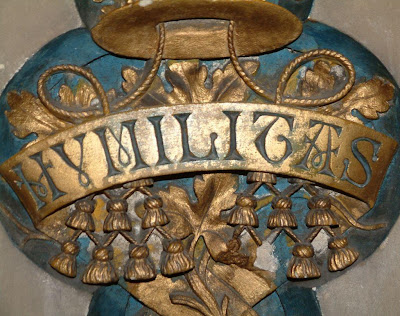 His motto, 'humilitas' (humility), is also seen in the decoration of his altar. Despite his high office, it seems appropriate enough.
Posted by Lancaster Cathedral at 07:12