Behind the scenes at the Vatican 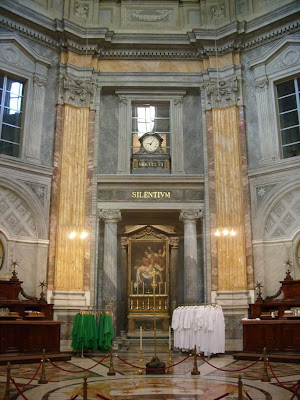 Contrary to popular belief, Sunday is rarely the busiest day of the week for priests. It is, however, probably the busiest day in most sacristies, and with this in mind today the blog goes behind the scenes at the sacristy of St Peter's Basilica in Rome. Our Cathedral pilgrims celebrated Mass in a chapel of the Basilica's crypt on Friday 30th October, and these images were taken on that day. 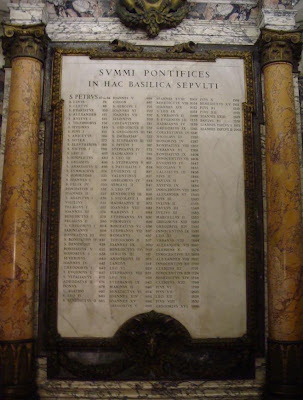 Even the corridor leading to the sacristy is rather impressive. Among the items you can see here is a list of all the popes who are buried in the Basilica. 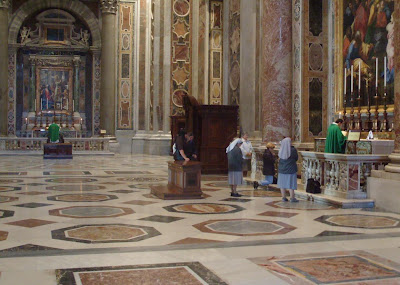 Each morning there are opportunites for individual priests and small groups to celebrate Mass at one of the many altars around the Basilica. As our group made their way to the crypt they witnessed a number of Masses taking place; you can see two priests saying Mass in this picture. 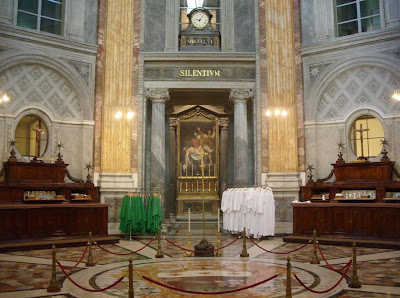 The sacristy at St Peter's is quite magnificent, and maintains a certain dignity even in the midst of the frantic activity which takes place there each day. This is the main working sacristy, though the Pope himself vests for Mass in another place. You can see the green chasubles and the albs hanging up, ready for use by visiting priests, while chalices and other sacred vessels can be seen at the sides of the picture. 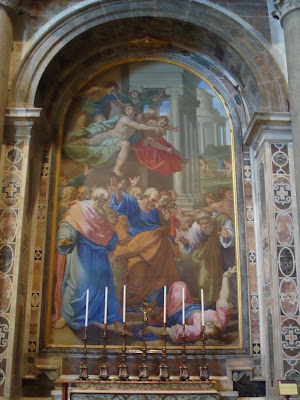 Leaving the sacristy, this is the first thing each priest will see: an image of the death of Ananias and Sapphira, who died after being confronted about their dishonesty. The Acts of the Apostles tells the story of how they witheld property from the common fund, for their own use. It is, perhaps, a reminder that in the midst of the splendour of this place, everything belongs to God and each of us must seek His will, not our own personal gain. You can read the full story at the beginning of chapter 5 of Acts. There's still more to come from the Rome pilrgimage, including highlights of the Papal Audience.
Posted by Lancaster Cathedral at 06:48