St Paul's Outside the Walls 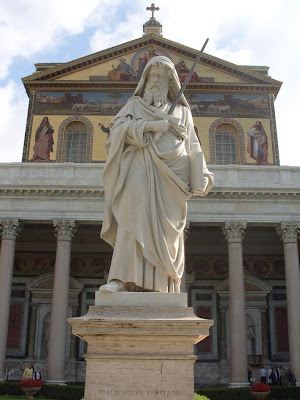 Today the Church celebrates the feast of the Dedication of the Basilicas of Sts Peter and Paul, two of the four major Basilicas of Rome. In Roman mythology the city is said to have been founded by twin brothers, Romulus and Remus; in history, Christian Rome was founded by Peter and Paul. With today's feast in mind we take a look back at one of the final stops on our recent pilgrimage to the eternal city, the Basilica of St Paul 'Outside the Walls'. A large statue of its patron stands outside the Basilica. 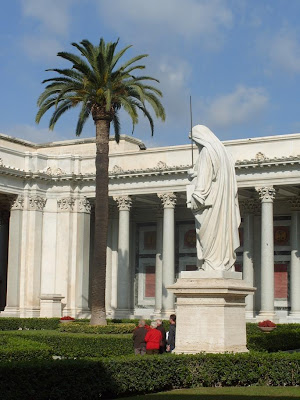 To see just how large it is, take a look at this image. A number of people are posing next to the statue. Now there is a sense of scale! 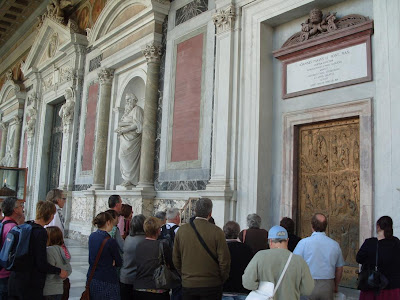 Our Cathedral pilrgims visited the church on the morning of Saturday 31st October, and once again were treated to a guided tour. Here Anthony points out the Basilica's holy door, which is opened only in jubilee years.

The Basilica played an important role in the recent Year of St Paul, which took place to mark the 2000th anniversary of this great Apostle. A plaque on one of the doors commemorates the year, which the Pope began and ended in the Basilica. 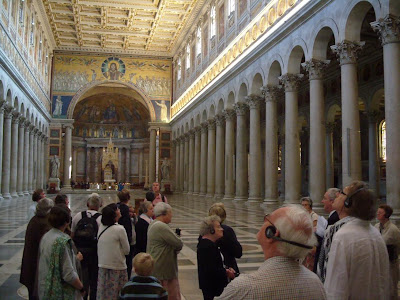 The original Basilica was built in the 4th century, but was destroyed by fire and then rebuilt in the mid-nineteenth century. Despite its relative modernity it follows the model of the earlier basilica, and is a most impressive space. In size it is second only to St Peter's. 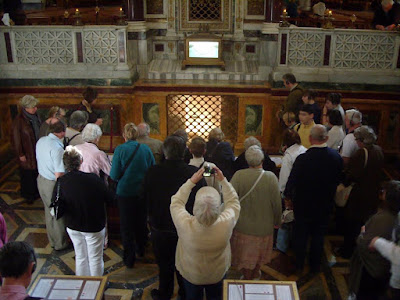 The basilica is built over the tomb of St Paul, which is located immediately below the main altar. During the Year of St Paul further examinations of the tomb took place, and as a result archaeologists can now say with certainty that the remains of St Paul are indeed here. As with St Peter, the Christian community has preserved the burial site for almost twenty centuries and has marked the spot with a fine Basilica in honour of the saint. Here the group is seen looking down into the tomb. 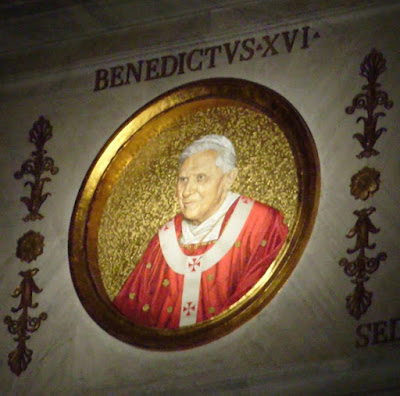 Starting with St Peter, the Basilica has mosaics of the faces of all 265 popes. The image of the current Pontiff is always illuminated, and here is the mosaic of Pope Benedict. 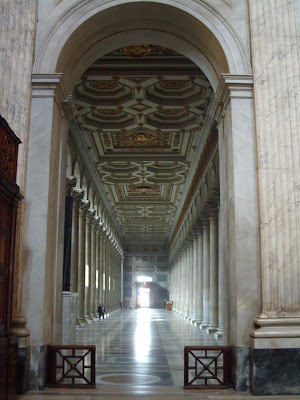 It's hard to capture a sense of the sheer size of the building, but this image gives some impression: see the man walking close to the pillars on the left hand side of the picture, and then think that this is the 'side aisle' of the church! 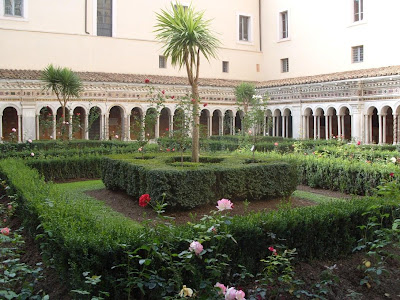 After the tour the group had some free time to explore some smaller chapels and the grounds of the Basilica. Some chose to visit the cloister, which is seen here. The Basilica is home to a Benedictine community, and it the current Abbot is an Englishman, Abbot Edmund Power.
Posted by Lancaster Cathedral at 07:36